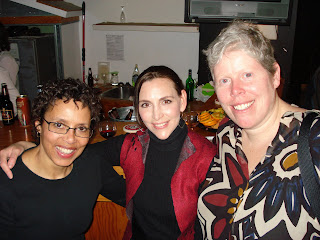 Show time just a week away, this time next week I’ll be running around like that headless chicken trying to get everything up from the basement, out from my studio and packing to go to the One of a Kind show Spring ’09!!!! Way too soon in my book even though it is a week later than usual…. I hope that means some different folk will visit that can’t make it at the end of March.

It’s been a busy Winter even if I didn’t get much work done. I attended more workshops, seminars conferences than usual and did some learning.
Here are myself with Andrea Graham feltmaker and Jane Thelwell potter at an Ontario Crafts Council conference in Ottawa, they got their work accepted into the Masterworks East travelling show but I was there to congratulate them and just hang out and connect. The next day was busy with classes and that was great. I learned lots about Grant Writing and about working with my craft for photography. 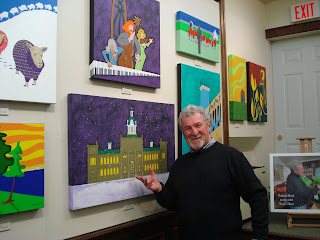 What I did with my Saturday afternoon…. I went to the opening of an art show by Terry Culbert at Gallery Raymond here in K’town. I’ve known Terry for a while through the Arts and Letters Club here but met him about 17 years ago when he got me out of bed!!! Well, the phone rang while I was nursing a cold and someone said he was looking to film me in my studio for Gobal News! Well, when you’re looking for a cure for the common cold just say ‘Mr DeMille’ is at your door. He was great and fun and did a three minute segment that I taped…… ( note to self: dig through those old video tapes for that segment!). 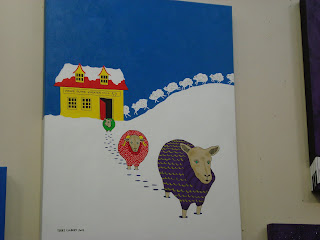 Wonderful whimsical illustrations which I learned he’s been doing for many years. One that touched me is the Wool Factory painting, (not it’s real name) where sheep are going into a barn and coming out with their fleeces changed into cool sweaters!!! 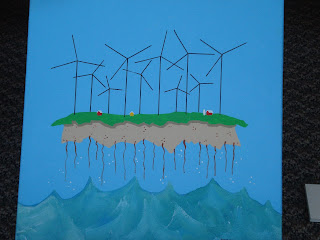 Then there is the one I saw as I was leaving, chatting outside with another Amherst Islander. It’s of the new and controversial wind turbines that sprouting up on Wolfe Island and shows the island floating above the lake. The funny thing is that someone mentioned that we could in future, sit on the lake shore and watch the island float up and down as the turbines caught the wind!!!

I’m getting some responses from the listing I have for teaching Machine Knitting at Haliburton this Summer so I hope I’ll get a good class full. Take a look and think about spending a great week in July with me showing you everything I know!!!!

Well, that’s enough nattering, I’ve got to take a photo of myself at the knitting machine so I can make a new booth sign…. I could use the older one that I have on my web site but I want something up to date meaning with my new short hair… and there are three sweaters waiting to be knit… they are only cones of yarn, labels, buttons and a tag in a basket….

Friday was the opening evening of the Winter Art Exhibition at the Thousand Islands Arts Centre (Home of the Handweaving Museum) in Clayton, NY. I have taught there and am a member so when the email came in December I decided to make an effort. First, I thought I’d make a jacket then thought better…

As I knit my way towards the One of a Kind show and Sale ~ in Toronto this year, first five days ~ the phone rings….is it library telling me I haven’t returned a book on CD (they found it eventually), a bill I’ve overlooked or good news? Great news, I’m back teaching another week…

Busy, busy, busy…for the one day show, but it is a wonderful ‘local’ event. PS. This was a wonderful weekend and nearly 2000 people attended! The weather cooperated and we finished with a great potluck supper in the garden after pack up. Hope to be back in 2014…see you there then!