Another show down as the Summer progresses and I’m happy I got into Artfest Kingston at nearly the last minute.

A class I was supposed to teach fell through for Saturday and we cancelled it a week ahead….I had thought about trying to get into Artfest Kingston but I always apply in the proper timing which was months ago. However City Park is big, a show can always use another participant and their fee and as I had talked with Lory MacDonald when she was working on organizing the show to start last year I thought I’d give it a try…my DH always says if you don’t ask the answer is always No.

Well, I was welcomed and had a few short days to prepare. 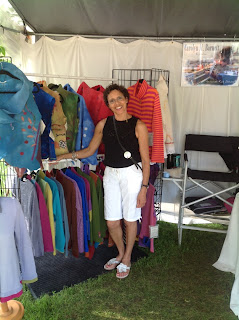 As I have done a couple of shows over the last month or two I was prepared and pretty much good to go…the last show was Art Among the Ruins in Newburgh with a pop up tent we recently found in WalMart, a great day that was too, but three days calls for the old battleship tent to go up. It’s a bit of a chore, heavy, lots of tubes and corners, big cover etc but it’s the only one I rely on for a long stretch. It stands up to most weather and has walls to tuck everything up an night. I always put up a 20′ tarp under the roof to give shade and keep the booth cool and the sun of the fibres.

We put up the tent on the Friday…in the drizzle! Organizers went around with bales of hay to fill in muddy puddles.

This shot is from one side and behind my rack stands my old workhorse of a mirror…I shared it with the young woman two tents over who had fabulously colourful tie dyed clothing but no mirror.

There was music supplied by various local bands and performers, wonderfully local and healthy food in one section, a huge mural which was worked on by anyone who had a mind to paint, an acrobatic performance, a children’s area for crafts and activities and porta potties scattered about

The weather, which had been slated to be a bit rainy, was perfect…not hot so folk were dragging themselves around nor cold keeping them away. Many came from downtown, some on the tour train and I got to see most of the people I used to see come down to Fanfayr.

Once or twice I needed to set people straight that this was not Fanfayr reborn….the late Joan McGrath retired her show when she did and this is a whole new show run by Lory MacDonald who runs shows around Ontario.  She brings a crew with her and they run around all weekend keeping things in order.

Thinking of the Summer I knit a couple of new cardigans with some different cotton yarn I had recently purchased, I got them dried in time to stencil the motifs I had planned.

The pink cardi in this photograph has morning glory on the lower right, back neck and left sleeve. This is something I used to do years ago and had a hankering to do again…just for fun!

The pathways through City Park left lots of room for the foot traffic, lots of room for strollers, dogs and groups of friends who chanced upon each other and stopped to catch up. The part itself and the surrounding quiets streets and the lot behind the court house provided lots of room to find parking.

I’m going to get my application in early for next year! 2014 will be Artfest’s third year in Kingston.

Last weekend was the Sheepdog Trials event in Kingston at Grass Creek Park. It’s an annual event in which I have taken part for years. I have a lovely time and my work travels back to far flung places such as the US and Australia!  The skein I was handed. One of my favourite parts…

What to do…what to do! I’ve had an Etsy shop for years now and it’s done OK..and not OK but it’s a great way to have a shop attached to my web site and have it seen around the world. I know I’m competing in large market but rather that than not at all My…

Winter and I’m working through my custom orders. I didn’t to a Christmas or ‘Holiday’ show as I have done over so many of the past 32 years so I have’t a lot of pending work. That could be good, no one likes to have no work, but it gives me more space, makes me…

As a wearable art textile artist I rarely exhibit in ‘art’ shows that feature wall art (paintings, hangings etc) but I made an exception with this show….I took in my ‘Village in Spring’ felted jacket to be hung on the wall in the Summer Exhibition at the Window Art Gallery here in Kingston. The Window…

Here is one of the yellow bicycles scattered throughout the Beaches neighbourhood of Toronto where I spent last weekend for the Beach Studio Tour’s 20th Anniversary. It was quite an eventful weekend to say the least!  I was the guest of painter Roderik Mayne and his wife Susan (who bopped around all weekend baking cookies,…

I just got my five shots back from Steve Di Monte of CYL Photography. Steve was once again at the Wearable Art Show taking pics of the fashion show and of our work. He was offering five shots for $40 right at the show and had three models with him. I took this offer last…