Last week while wandering around Perth (ON) we checked out the local charity shop (Salvation Army I believe) … you never know what you are going to find. When I found my husband in the window looking at something in a silent auction … an old knitting machine…called a Knitomat. I think it as from the 1950’s.

You can see in this photo that the needles heels are right back at the rear of the bed but the needles are sticking out front. The needle ‘heels’ are really the levers that come out as the carriage passes, like levers that push the stitches off the needles. 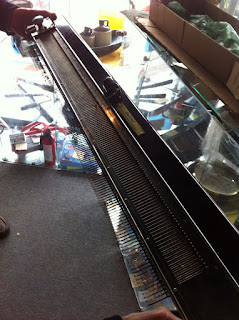 I thought someone had attached it to a wooden board but on looking at the manual that came with it it  came on that hinged board. The other interesting thing was that it didn’t have ‘sinker posts’ per se but strange angular rods that came moved and came forward as the carriage moved across the bed….the needles were fixed and stationary!

My DH did encourage me to leave a bid, but I already have machines in storage and one vintage machine which I haven’t figured out yet…so I left it….however, not before taking some snaps with my   phone.

Took a photo of the cast on rag that came with the machine, commercially made strip!

I’ll list it on the Yahoo Historic Knitting Machines list and see if anyone has ever heard of this! If I thought I would have any spare time in the foreseeable future I might have bid on it and hoped to win ….. but, as I said, I haven’t even worked out the other vintage machine I have! 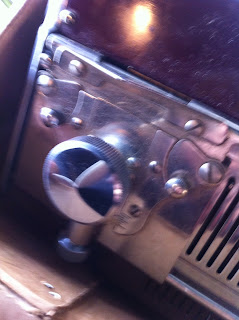 Rather blurry snap of the carriage. 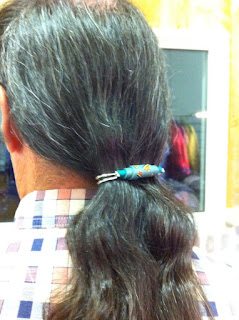