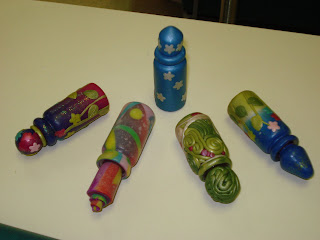 My friend Georgia came with me to chemo last week and brought five Bottles of Hope that she had made. These ones were beautiful and this photo doesn’t do them justice but was in my treatment chair and took this on the spur of the moment. Check out her blog for pics of her ‘ladies’ kaleidoscopes.

Well, we had our gallery Open House at Sandra Whitton Gallery. It was a cold and freezing rainy day but we did have some brave folk turn out to look at the wonderful collection of art. 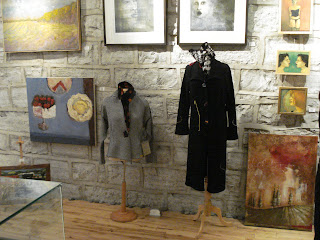 Here is a shot of two of my designs among the other work. 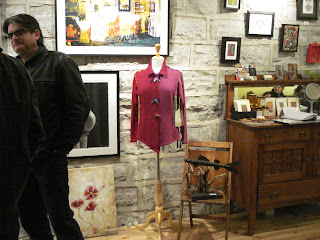 Proprietor Sandy showing off her Barnett Design knit.
That was last weekend, this past Wednesday, my lovely ex assistant Shawna starred in an
exhibit at the Hotel Dieu Hospital Johson 7 waiting room. They mount exhibitions there every four months and it gives the patients some wonderful things to look at. In general it’s wonderfully visual place to be, first with the art and second, with the 7th floor view of downtown Kingston and the harbour. 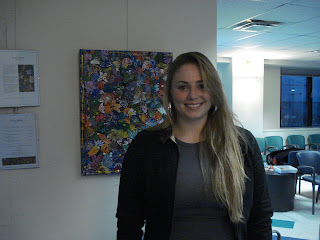 Here’s Shawna standing in front of one of her floral paintings. 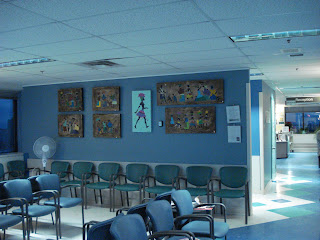 Here are her African Women paintings brightening up the waiting room.

Then, last but not least today I received a phone call early to say that my MUGA scan (heart) which was scheduled for Monday, was now put off until Mid January because of the downing of Chalk River where the radioactive isotopes are made for the world. Then I read about it on the front page of our paper. As many of you might know certain drugs for breast cancer can do heart damage so a MUGA is given every three treatments. I’ve had three and want to know if my heart is still healthy, it was scary knowing I might have had 5 by the time I got my scan. Then an hour later I was called to tell me that if I could get my butt into the hospital by 7:30 to morrow morning they could squeeze me in!

Later I took my 88 year old Mum to the Cathedral for a concert and, though late, found a parking spot right by the door! No dropping her off then searching!!! I got home and found that my husband had moved the new obscenely huge TV to where I wanted so now my living room once again resembles a living room and not the Odeon cinema!

With that kinda luck I shoulda bought a lottery ticket… but I’m immensely fortunate to be able to have my scan.

I’m off to Artemisia in Westport to restock some items as they do seem to sell well there, then my friend Georgia (framer and 1/3 owner at Artemisia) and I are off to Perth to visit Janie Hickman at her yarn store JanieHKnits as she’s having a sale.I didn’t make any decent money at Fanfayr…

This little one I was knitting this one while I was at the One of a Kind Christmas in Toronto  (…trying to avoid US economy!) trying to get it done in time for my stepdaughter’s Toronto baby shower.  It was the Yoda coat and a little hat and some booties worked from some wonderful…

Off to Toronto tomorrow to be a part of the Just for Us Originals show at the Living Arts Centre in Mississauga.  It will be another great weekend staying with my friend Sonja who is also at the show with her unique knits. It’s great how two women can enjoy and pursue machine knitting designing…

Well, the November meeting of our polymer claygroup in this end of Ontario was attended by just Georgia and me. However we got a lot done. I wanted to learn about Gera Scott Chandler’s ‘fabric’ claying as I might be able to use it on my buttons (which might lead to a whole new sweater…