Skip to content
One Saturday in February an event was named ‘FebFelt’ and seven women got together to create…..a felted vest. On the suggestion of the women of the board of Kingston Arts Council, our valiant pres Joan Heaton in particular, at a slightly boozy brunch I got caught up in the tide and learned a lot more in two months.
First, I dyed the seven pieces of prefelt for them to use. I had not dyed much before and handling wool is delicate as you can’t allow it to get too hot as boiling will cause..of course…boiled wool, great in a bazer! I had a lot of fun doing this especially learning how different dyes work.
Through a series of emails over the Winter we put together stuff we needed, carpet rolls, pool noodles, bubble wrap, squeeze bottles and old towels etc. 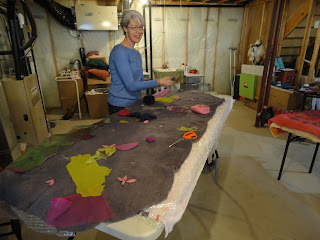 Deborah offered her unfinished basement and it was perfect. Lots of room, cement floor that she didn’t mind getting dye leaking onto it. great light from the windows and a laundry sink. We filled it with tables.


I had the ladies roll out their prefelt and go to town with decorating. Creating a pattern, designs whatever took their fancy with silks and roving in various colours. Jennifer fancied a bit of a floral motif. 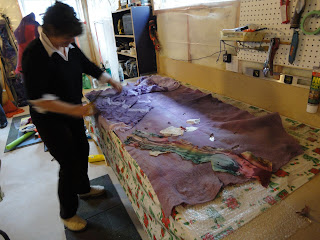 Deborah, working on a work bench in her basement, used a purple base and found some cloth and also a silk scarf she thought she’d try, she got good with the scissors. 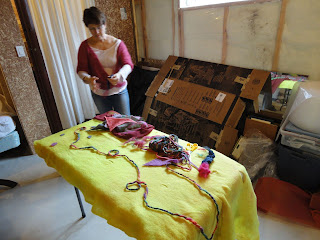 Joan was challenged with the brightest piece which was supposed to be chartreuse but was more yellowy, I tried to toss colours to her for her embellishments and I love the long winding ‘road’ of multicoloured yarn she has snaking across her whole piece. It turned out beautifully colourful. 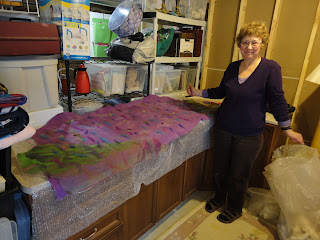 Julia worked away on the old kitchen counter that Deb had replaced, she had a huge worktop and it was at a good hight. The purple piece I had dyed still had dye left in it so Julia and I went to parties that night with purple and red hands respectively. Deborah’s Mum, a retired nurse, suggested bleach and Lux soap…I tried a mix the next day and it took off a lot of the dye. Thanks, Margot. 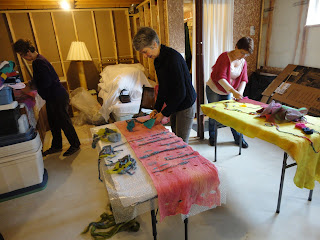 Elaine opted to cut her piece in half lengthwise and make two scarves…which became just one when she realized the work and the time it would take….I hope she gets to doing the second one later at home. 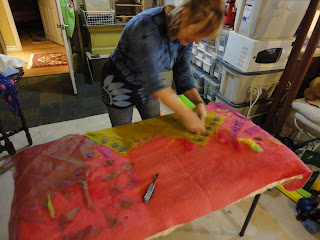 I tried to dye a red piece for Karen but it fell a bit short…even though it still had enough red in it to colour our fingers! I love what she’s doing with the chartreuse silk chiffon and some dots of roving. 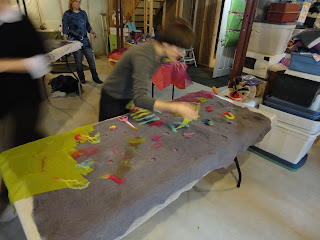 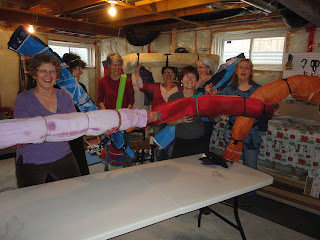 Finally all the designing and laying on of embellishment was finished and the felting started….lots of rolling in bubble wrap and old towels.  Here I think they’ve been working too long and need a break….
After Lunch there’s at least an hour more rolling then the rinsing, washing, rinsing….. 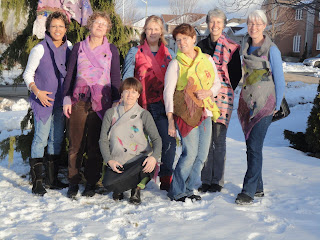 But the finished product is stunning, how colourful…
(mine is the only one that is dry!!!)
Great work girls!!

Sweater Sticks in progress. Whew! What a month. February was a month of workshops. Two machine knitting in my studio which were such fun and two button making, one at Wool Tyme and one with the Kingston Sewing Connection here in town. Working with cane. I had such a blast with all the groups, and…

Friday was the opening evening of the Winter Art Exhibition at the Thousand Islands Arts Centre (Home of the Handweaving Museum) in Clayton, NY. I have taught there and am a member so when the email came in December I decided to make an effort. First, I thought I’d make a jacket then thought better…

The April Fool’s Day display at this year’s Spring OOAK Surely while I’m on vacation I can find time to post. Taking my laptop with me (and printer this time) to the rental by the shore with friends I can keep up with my email. This is good as I am getting emails about a)…

I had a great workshop on Monday with a group of women here in Kingston and while I was fishing around for photos to put in this post artists Alana Kapell, who organized the day, sent me a ‘story’ of they day. Check it out. we had a super time with even wine and a…

You MUST, MUST visit this wonderful store in North Bay! It’s like a few yarn store I’ve visited in my travels, the one I hit in Washington DC, Rose Haven Farms in Picton and a few more…. the choice of yarns is fabulous: cashmeres, possum, bamboo, cotton/tencel the list of fibres goes on.  However the…