Well, I know it’s been three weeks today that I started the East Coast Machine Knitters’ seminar but things have been so busy since I returned that I have only just found five minutes to finish logging my journey. I started out to leave the island but stopped to pick up some PEI potatoes to take to my hosts of that evening. Then headed to the Confederation bridge which was neat to see in the daylight (I had crossed in moonlight just days before). I was a shocked at the fee to cross back to the mainland – $44 & change, and now have heard jokes about the population of PEI growing as people set up house while they save up to get off the island! I colleague says she goes online to send her parents a gift of ticket when they are coming to visit her in Ontario. I guess I have crossed many bridges in my travels and not encountered this kind of fee before….anyway…onward…

I took the route through Edmonston NB then the TCH turns south to Quebec City where our friends Catherine & Dennis live…across the St. Lawrence river in a beautiful old neighbourhood built around the lumber industry of over a century ago. I would put a link but they don’t have a web site but they built my Pink/Green summer slides which I have worn and worn. They can always  be found at the One of a Kind show in Toronto, check them out this year at the Christmas 2012 edition of that show. 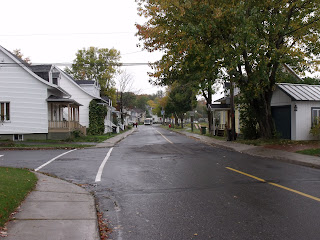 We took a morning walk along the river and through the neighbourhood where I got to look at all the beautiful and historic houses and cottages.

The fall colours were out and even with the drizzle I fell in love with this neighbourhood…a little like my own though ours grew up around the Kingston Penitentiary! 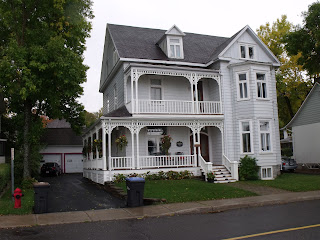 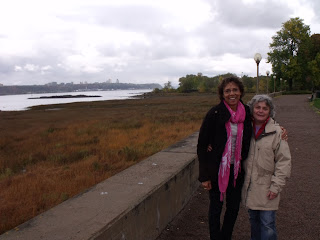 Here is a beautiful old ‘lady’ which was built by Joseph Garant ‘marchand de bois’ in 1906.
Here I am with Catherine with Quebec city in the background across the river. 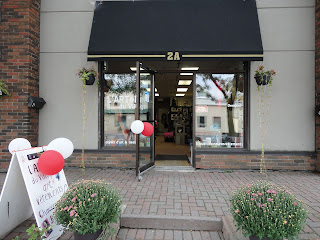 Sadly I had to leave my little sojourn in their lovely French household (in their 1880’s house) to head to Montreal.

I had an appointment with Roxana at L’ARTelier du Village in Point-Claire QC where she now has some of my work. I already have an order to make up a smaller version of one of my knits. 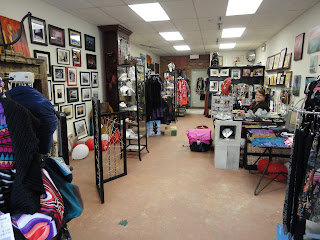 Roxana has been open for nine years and really is a go getter and has a wonderful array of art work both fine and wearables and other unusual work. She has made a great effort to stay in touch and I’m looking forward to more business with her.

I made it through the city traffic to my friends John & DJ for dinner. John is the founder and the Marr half of  macmarr.com  guitars, a successful Dragon’s Den entry! I remember him from high school and college days and forty odd years later and reconnecting I was so happy I could visit with him and is lady DJ for an evening and catch up.

I had a great but long journey home and ended up staying with friends in Montreal when I had thought I would drive the last three hours home after our dinner and visit. However I ended up staying over and going out for brunch in Montreal the next morning. I love cities so it was super to walk around Montreal as we made our way to L’Avenue for eggs Benedict…not just ordinary EB… find it and give the place a try…especially the washroom!

Coming home my next task was to work up to our new venture the Kingston Chamber Ensemble for whom I built the web site and am in charge of the online ticket sales, emails, flowers for the stage at Currie Hall etc. Now that the first concert is safely and successfully over I’m concentrating on the orders and work that seems to be coming in!

Back to the studio.

Well, thought I’d better bank out another post, the last one for 2008, as the last few weeks have been very busy for me and everybody I know. Though the shows are over for another year, it’s more than past time to look at next years shows and mostly the cheque writing part ….. I’m…

The front doors of Flemming College“Within These Walls The Walls Disappear” I’ve been back from my first whole week in Haliburton teaching Machine Knitting. Unfortunately I found that life goes on when you’re out in the country, driving through rain storms to the BBQ’s, hot tubbing and lake swimming. The work I left behind divided…

This photo illustrates what I was doing yesterday rather than knitting….. well I did get work done later but this was taken during a visit with an old friend who is a bike freak! We used to date way back in high school and he did me the honour of breaking up with me when…