Who’d a thunk it. On vacation and I didn’t pack my sock knitting stuff…on purpose. First…there are too many ball of yarn to pack as I knit my socks from about a dozen different self patterning balls each. Second, thought I’d give my left thumb and wrist a rest.

Anyway, I’ve got to spend time browsing and ‘Pinning’ on Pinterest, ‘sock’ing away ideas for when I get back into the studio.

On my way to getting away I found (31 days before departure) my passport would expire the day before we returned so off I went to Service Canada to renew mine. I was told that through the Service Canada office the turn around time was 20 days…I though that would leave 10 days to get it back by registered mail….oh no…I might not get it back until the day of our flight on February 23rd. Sheesh!

OK so I had to drive to Whitby (closest…2+ hours on the 401 highway)  – January 27 or 28th, with my old passport in my hot little hand to the actual Passport Office there…the turn around time there being 10 days…surely I’d get it back in time. When my number was called I popped up with my forms all filled out, old passport ready to have holes punched in it and $120CAD…..and found they no longer take cash!!!! Paid up and was told it would be mailed out on February 4th.

Well, I got it done in a flash and headed out on my way home, but not to make this a long single mission I had planned a stop at Dreamspin Fibres…way out in the country at Campellford, to pick up some roving for a workshop I was doing a couple of weeks later. That was a lovely side jaunt as it was a beautifully day with the sun shining on the snow.

Driving past the Warkworth penitentiary…way out in the country reminded me of the day back in the ’70’s when my ex husband’s band played a gig at both Warkworth and Kingston Pens. I wasn’t cleared to enter so I hung out in the countryside for the duration of this gig, taking pictures in the brilliant snowy sunshine….anyway, I digress. 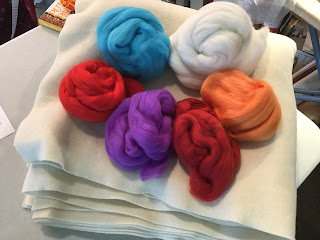 Maureen and her husband were at home and I had a marvelous visit with them both and it’s just so much more fun to stick your head and hands in roving than ordering it online. Also, I love exploring other artists studios and getting inspired and energized by their work and creativity. I picked up some more prefelt which I will dye for new jackets or vests and some bright roving for my workshop…with 5 year olds!

Well, I was happy with both aspects of my sudden trip as it was comforting to know that I’d be able to leave Canada again soon – you can’t go anywhere with a passport with holes in it…even if it hasn’t reached it’s expiry date….it means it’s been invalidated for you.

Not even 10 days later I got a card from the post office about a registered package….hmmm, I hadn’t ordered anything. It was my passport and it was February 4th…19 days to spare!!! I have a feeling I needn’t have made the drive and spent the gas…but I did have a lovely afternoon out….and now they let me out of the country to come somewhere sunny!

Here we are in the depths of a Canadian Winter and I am fortunate to have been able to travel to the Caribbean for a warm getaway. Not something I have been able to do often I revel in the travel, new people, new lands and vistas, a new country with all the different customs…

Off to Toronto tomorrow to be a part of the Just for Us Originals show at the Living Arts Centre in Mississauga.  It will be another great weekend staying with my friend Sonja who is also at the show with her unique knits. It’s great how two women can enjoy and pursue machine knitting designing…

Well, just one short week to go and I’ll be on the road to Toronto for the Spring 2013 One of a Kind Show. It feels kind of fresh for me as I didn’t do it last year so have had a break. I think I went down at Christmastime to look but it’s been…