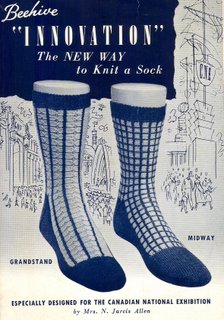 Thank heaven for junk or ‘yard sale’ stores and the husbands who frequent them. My husband goes out, I don’t know where he is (he works at home) but he comes home with the faint odor of… no, not perfume, not booze but mildew from rooting through these establishments! Today he came home with a pile of neat stuff and one of the old knitting patterns was this one for ‘New Socks’.

This pattern is from Patons and Baldwins and was ‘especially designed’ for the Canadian National Exhibition in Toronto by a Mrs. N. Jarvis Allen. It lookes like it was done in the what looks like the ’40’s… there’s no date on the pattern. The two styles are called ‘Grandstand’ where I have seen the Blue Jays, a rodeo and the Beach Boys, and the ‘Midway’ where I have staggered more than once vowing to stick to the mild ‘ghost train’ after spending too much time upside down spinning in the air miles (well… seemed like it)over the fairground.

The yarn to be used was P & B ‘Patonised’ wool. I’d love to hear from anyone who knows what that is!

The keen thing about these socks is that they are knit flat, working the upper, patterned part of the sock then working the toe, foot, heel and back leg afterwards and attatching.

Well, I know it looks in these pics like I’ve been skiving off from the studio but it got so hot I just couldn’t function in the studio anymore the last couple of weeks. I’ve a studio full of windows and a skylight, ceiling fans and a breeze from Lake Ontario a block away but…

Well, cruisng the library for something else I found a wonderful book in the business section: ‘Shops and Shopping 1800 – 1914’. Yes, it really is a book about what it says. I’ve just dipped into it so far but I’ve decided that I have to find a copy for my own library in my…

Handloomed Knit Artwear 10/12 by Crafted Spaces | Blog Talk Radio Yvette-Michelle of Crafted Spaces is having me on her web radio on Wednesday for a half hour interview. I’m really excited and looking forward to answering questions from callers…..call in!

OK, too long since I posted, not that I haven’t had anything happen, just, perhaps, too much happening that kept me away from this segment of cyber space! I had a weekend workshop in my studio and though I only had two who could make it on that particular weekend, and I like to have…

That usually means going away and doing just what you do in your everyday life….well I sort of just did just that this past weekend but as my shows are over for the Summer it was different! I stood in for a friend. Friday afternoon was spent in a show tent in a park, something…

This is a pic of me with the lovely Nancy, proprietor of Woven Art in East Lansing. I always look for knitting shops as we travel and I picked this one out of the phone book as there were a few and I could only visit one if we intended to make the Canadial border…