Show time! The Just For Us Originals wearable art show happens this Friday and Saturday, it will be the first show of what I just realized will be a very busy Fall season. 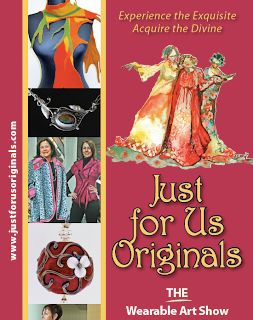 The Just For Us Originals is a wonderful show and I’m glad it’s found such a glamorous venue at the Mississauga Living Arts Centre. Those huge windows throw such great natural light on all the artists’ work.

Yesterday I was making a new sweater plus lists of what I had to do come Monday, plus working on my new tutorial DVD – Collars – and trying to figure out when my next free weekend would be when I suddenly remembered another show I’m doing in November that I had momentarily forgotten!!!

The Maker’s Hand in Picton November 4th, 5th & 6th is a small but special show that I’ve been a part of since it’s second show so I’m looking forward to heading back there. 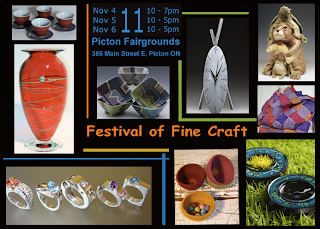 Meanwhile, I’m trying to get some exercise so I took my bike out instead of walking and went down to the Kingston Market where every Sunday is held the Antique Market, the day was a beautiful, warm early Fall day and it made working in the studio the rest of the day a little easier…especially as I had a knitter friend come by for a bit of a play date! While at the market I bought the book all about the making of The Who’s ‘Tommy’ back in the ’90’s in New York – I was commissioned to do 36 knits for the Toronto production.  Then I got home to have my husband say ‘yes, like the one you already have!’ So if anyone want’s it ….. it’s yours!!!!! (I thought it seemed familiar!!!) 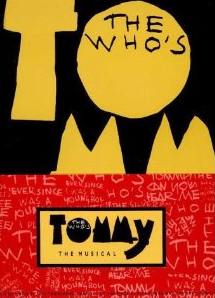 When I get some photos of a couple of new designs I’ll post them on my web site (another task…updating and freshening that!) but now I’m going to get a bit of rest as our beloved pussy cat woke us early this morning to pass away, he was elderly and sick so I’m glad he’s more comfortable now though we’ll miss him so much.

Well, now for a bit of a snooze before I hit the knitting machine and my list of shows in Spring 2012 that I have to start paying for!

It’s that time of year…to review your life, what you are doing and how you are doing it. I’ve been updating some web sites that I’ve built (check out the list at my other business http://twohatssimplesites.com/clients.html site) and some still need a lot of updating….including mine! Anyway – Wow! I got an email this morning…

This is the only place were putting on weight is a good thing! Rosemary J. at her knitting machine Just back from the first show of the season, the One of a Kind Show in Toronto, and it was a great weekend to feel back in the swing. The show was early as it was…