Summer is here, and the spirea in front of our house has had it’s day but like lilacs isn’t it beautiful for the short while it’s in bloom. 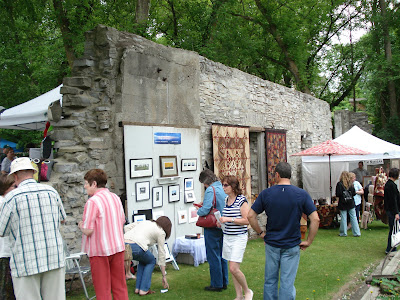 Two weekends ago I took my Mum and Dad for drive out to Newburgh for the Art Among the Ruins, a beautifully set small but well attended craft and art show in the country. I had never been and we all loved it. I’d love to do it next year if Steacy has room for someone from ‘out of the area’ as Kingston is to the Newburg/Odessa area. 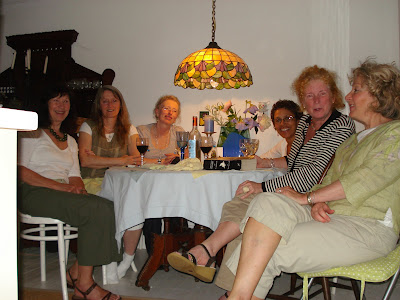 Last week saw us hosting a jeweller friend Susan Watson Ellis (I’m happy to have a few of her pieces) while she taught in Kingston and amazingly we managed to get six women together at Margot Miller’s little house in Rockport – the Summerhouse is her little shop with unique hand made clothing…. including some of mine. Usually we are all in different places and doing different shows and exhibitions and it’s hard to get together. Even at a show you want to chat but we are there to sell and meet the public. This was somewhat like ‘The View’ only with wine! Our hot topics were being middle aged, getting shorter and wider but that we were all still fabulous!!!

I had a busy weekend. Our friends the zoo vet and the college prof, writer and movie star…. (well an extra) were passing through to Ottawa and stopped for lunch. My Dad dropped Mum off to go for his swim and came back later and my neighbour Yvonne came over. I called my other neighbour (just back from Russia) but she doesn’t answer her phone. We had promised to have an hour get together but good friends, food and conversation cannot be cut off, though work beckons (loudly!!) We got a more detailed explanation of why the pachyderm Tessa died in the zoo last week, she was not a strong specimen in the first place and lived longer in captivity than she would have in the wild. I read today in the Whig that she the elephant supervisor Eric Cole said she had a form of Down’s Syndrome and that the Toronto Zoo‘s elephants were orphaned back in the ’70’s which was a major killing period in Africa. 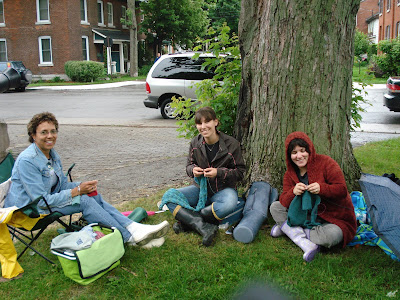 Then I went down to Skeleton Park (McBurney Park) for the music festival and for WWKIP (World Wide Knitting In Public) and met the Stephanie Earp who was on the cover of the Friday Whig. I first met up with Dad and Mum in front of the stage and listened to jazz in the rain which was great, lots of local folk and their kids and lots of mud!!!! I joined the knitting girls for a chat, I was wearing my Ravelry button from Wool Tyme… I’m CottonCarrie, and my ‘Knit ’til you die’ button from the Knit Cafe in Toronto. Wish I had been there sooner but, sheesh, you can’t do everything and my folks come first.

Came back, dropped into Yvonne’s to see if she finally got her iPhone, and helped her set it up and teach her at least to use it. I wondered why it was different from mine and realized she had got the new 3GS!!! Whereas my DH and I had gone to Rogers for the blow out on the 3G’s at $99. She had really been given the runaround by the Rogers store (long story I’m sure) but they seem to have made it up by giving her the latest technology!!! Lots of tutorials to come with her over glasses of wine!!!

Sunday was planting most of the flowers in pots that we bought the other day as the garden centres get close to closing down. Mum was over again so I planted, schlepped dirt, brought pots up from the basement and all the work that goes with that with Mum in a chair on the porch and when Dad brought lunch and coffee from Tim’s I joined them on the deck. It was the perfect day for sitting out. working as much as I could in the pm, running out for a Father’s day card then doing a Father’s Day dinner. My sis came to join us leaving her husband at home (well it was his Father’s Day too) to watch golf. It was a super evening for Father’s day. My neighbour took us round her little 1842 house and Mum just loved her bits and bobs around the house, it was a great treat for her.

Eventually I got back in the studio for some more work… after cleaning up the kitchen, DH did first shift so there wasn’t much left to do.

I found I have sold some work in three galleries… this means – make more of those items… when I get my orders filled, or between, and make a new page on my web site to take folk to those galleries: Kingston Glass Studio, Artemisia in Westport and the Summerhouse in Rockport.

Back in the studio again for another day, fielding phone calls, working out my car insurance, emailing clients …. and gettiing the baby robin out that just flew up the stairs and into my studio!!!! ….and such…. somewhere in there I will knit!!!

On our way home from vacation we hit Williamsburg and I found a knitting store. We managed to get to Knitting Sisters before they closed for the day. It is a wonderful store and they had just finished a workshop and the store was full of mad knitters with one husband sitting quietly in their…

I got this from my felter friend Andrea Graham, I love it! Enjoy.

It’s two days until the Maker’s Hand show in Picton starts, it’s three days long with Friday being 10am  to 8pm. That means leaving home (at least I get to sleep in my own bed) at 8:30am and getting back about 9:30pm. If we can catch the right ferry coming home it’s fewer miles and…

Oh what fun we had tonight! First day of the OOAK show and found out one of my peices submitted for the opening night fasion show has been chosen and they want to introduce the attached artist! The show is being hosted by Jeanie Becker and she did a great job of talking up Canadian…

I’m here in Toronto at the Ontario Crafts Council at the Etsy Workshop and Trunk Show which was organized by my friend Lindsey Fair!  I just learned a bit more about having my shop show up on my blog!  Here it is …. I hope. Now I had better get back to listening!