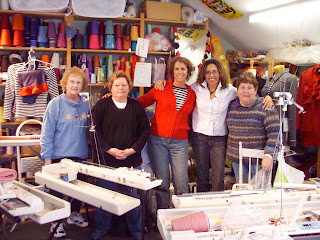 This gang or women descended on my studio last weekend out of a blizzard (no… we’d planned it for just ages) and I tried to work their @!*’s off over the weekend on their knitting machines.

Carol (in red) supplied the fuel in the form of a marvelous manicotti -yum- which we ate on the Friday night, joined my husband who shovelled the driveway so they could park.

We decided on what to make and my job was to try to impart some knowledge and hints, tips and techniques on how to make them. 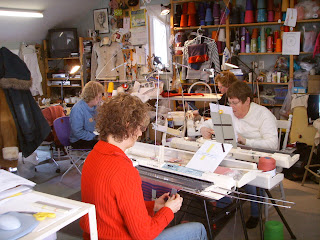 I managed to squeeze four machines in my studio and things went well, they worked so very hard, barely breaking for sustenance!!! Very admirable.

Using Garment Designer software we made patterns for each after measuring for slopers. Some folk can knit directly from a standard and some need resizing and tweaking to fit. I find that knitting a first garment shows you a lot when it’s done. I was lucky, my first was something that fit and I wear a lot but I’ve still had the odd one since, when trying to do a new shape, that I had to pull out sections or give it away and start again. The more you do the more you know your yarn/pattern/knitting machine/skill.

These brave girls drove home through Northern NY State in another blizzard but I’ve heard from them since and believe they’re all still alive!

I followed two days later through a blizzard to get to Syracuse airport to get to Palm Springs… I’ll post about that later.

Sarah, Sonja and me. It’s over! I’m saying that in the ‘Thank Heaven for that – it went well…I thought!’ Whew! Anyone who has taught will know of the prep,  research in what you don’t already know, boning up on what you do.  I was asked by Pat and Eileen to return as one of…

Well, damp and early I finished loading my car…sweaters, knitting machines, some promo stuff, extension cord at the last minute, some old mags that the ladies might like to dig through…and hit the road at 9am….of course half way through New Hampshire I realized I hadn’t packed mylar sheets for the electronic machine…maybe Edith  –…

I know this sounds so silly but I have a new iron……. yeah, big whoop! Well, It’s special and I found it (well my husband found it) at a store that sells stuff remaindered from stores such as Sears. He knew my older TFal was giving me a hard time not steaming when I needed…