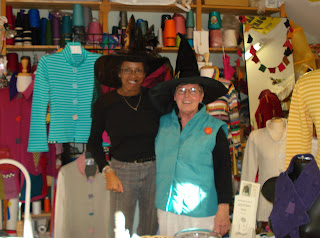 Georgia and me in our witch’s hats!!!! Boo!
(note the tulle w/spiders over my face)

Well, what a weekend. It was the Town and Country Studio Tour in and around Kingston and though I didn’t think I had done the prep I would have liked it went well. The weather cooperated and sales were made.

I have been mired in getting orders done in the past few weeks since returning from England and concentrated on that rather than make any new stock. I’ve got new designs in my head and they’ll have to wait a bit longer. However I did take the time to clear out some stuff, tidy up a lot. Hoover and dust. tasks long over due.

Georgia came to help me and keep me company, so I wouldn’t be alone in the studio, she wasn’t participating this time as she and two partners are running Artemisia gallery in Westport now. She brought he laptop and worked on the gallery web site while greeting visitors and chatting to friends. I had started some buttons Friday night and decided not to put that mess away so folk could see a bit of that side of the designs and work. It was fun to show people how the buttons begin, but there were no children visiting this year to whom I usually give a bit of a lesson then a small bit of clay to take home. 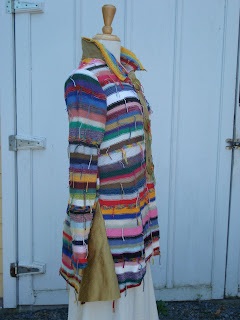 Georgia and I had made a trip to Toronto on Thursday for me to pick up one of my jackets which had been on display there. The Beach Studio Tour was founded by me and another textile artist Susan MacDonald back in 1994 while we were living in the Beach neighbourhood of Toronto. The current organizers did a retrospective using work from some of the original participants and founders.

It was great to get together with some of my Toronto artisan friends over coffee to chat and catch up. So often we are grabbing a chat between clients at shows.

Georgia and I then headed downtown and hit Mocuba Ribbon, Curry’s Art Supplies, MacFab notions for my clear button stays, Romni Wools to drool and pick up a few balls of wool, then on to the Paper Place (formerly the Japanese Paper Place). How great to wander along Queen St West again. It’s been a long time and something Georgia had never done! My friend Susan had asked me to check out elastic in Mokuba….. I’ve never seen so much
elastic in colours and designs!!! 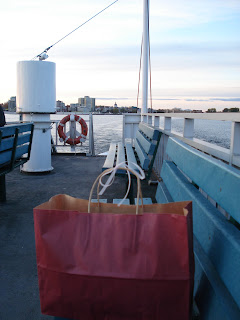 Anyway, back to this weekend. I madly had to finish a cardi for a US client who’s friends were staying on Wolfe Island and wanted to pick it up and save the sending. I ended up delivering it (in a way) I took it over on the ferry to the docks on the Island side where the lady met me, giving me a hug for my troubles (how sweet, we had only met over the phone) and then I turned around and came back. I took some pictures ( I keep a small camera in my purse at all times) of the beautiful sunset over Lake Ontario. Though cold it was well worth the rush to catch the ferry at that time… as you can see. Fortunately I found my leather gloves in the pocket of my jacket ….. left over from the trip to the coast in England last month. 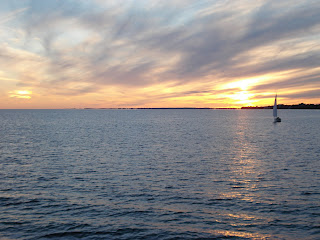 I headed home to prepare my studio, lugging forms and grids up from the basement. Preparing an area for my hot apple cider and cookies.

On Saturday morning as G and I were getting settled I decided to make up a ‘tickle trunk’ with a few pieces I really did not want to display again, though they were nice and had had ordered taken from them I just was tired of looking at them. Rather than ‘Free to a good home’ I put ‘Half Ticketed Price’ on them and sold three to women who looked fabulous in them! It makes room for more new and gives me some $$$ for yarn bills and to get one of the things fixed on my care that I have in a list.

Today was quieter and one of my clients dropped in, asked how I wast and told me her breast cancer was back. However it sounds as if it has been caught early (mammogram) and I’m sure she will do well. I’m praying for her, she had it 11 years ago and has been fine…. this is why I want a bilateral mastectomy, even though I had a clear mammogram a month ago. I need to feel I’m taking some care of the future.

On the lighter side, the pic above is of Georgia and me in our witch’s hats. I said I would lend her mine then reneged as I wanted to wear it for the opening night on Hallowe’en of Maker’s Hand show at the end of this month. I found another one, very chic so I can lend her my plainer one, here we are at the end of the studio tour modelling our chapeaus.

The Toronto show happened two weekends ago and though it went well the first two days we were pretty much rained out on the Sunday. It was incredibly hot and sticky but I always have fun at that show. I think it’s being back in the big smoke! I’ve always told folk give me a…

Whew! I think I can take a break for five minutes in July but May and June were busy months for events and invitations. Our first wedding for one for which I made a Julian Roberts dress…I’ll post about that later. In the arts field my dear friend Georgia Ferrell owner of Artemisia Gallery in…

…..from 10 – 5 Saturday and Sunday May 4th & 5th tour around the various locations and studios of Kingston for the annual art tour. Yesterday a small group of us was interviewed on Live@5 on CKWS…what fun that was. My first time in that studio….I’ll not watch the news the same way again! Check…

Another Summer show over, barreling towards the Toronto Outdoor Art Exhibition in Toronto in a week… I’m in Booth 539 Turquoise Doing a show on home turf is nice, sleeping in your own bed, having friends to stay and staying up late talking of all sorts of things that you never get a chance to…

Well, I was going to write about something I’m sure a few days ago but cannot remember what, I’ve been so busy getting ready for the studio tour this weekend. Well, I do know that I couldn’t resist picking up my camera and taking a pic of our cat sleeping on the ‘sheep’ mat I…