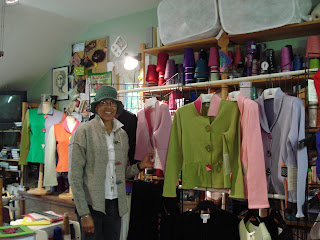 Well, we’ve had a good weekend, lots of folk showed up on Saturday and sales were made, pamphlets handed out and lots of chat, hot apple cider, sushi and cookies.

Today is quieter so we’re taking time to explore the internet. Web sites on knitting, polymer clay and also looking at Etsy as I would like to set up a ‘store’ where I might move odd items like samples and such. Stumbled across a great one about men’s knitting.

We’ve had folk from Finland, Australia, Britain and towns around. it’s been homecoming 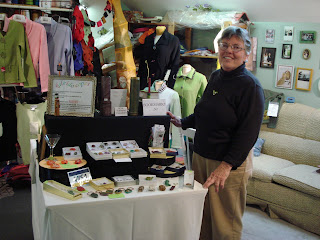 weekend here in Kingston at Queen’s University so the town has been filled with alumni sporting old Queen’s jacket with various dates on them, I saw ’92 last night which isn’t far back but I’ve seen 60’s an earlier in previous years. I went out to collect our sign from the corner and had to wait while the Queen’s Golden Gaels pipe band and cheerleaders did their thing in the road just outside The Ports (Portsmouth House pub) which is the nearest pub to the football field where Queens played Waterloo yesterday…. I still don’t know who won! But the people in the red tunics and kilts looked happy.

Here are photos of Georgia and me with our respective work.

One Reply to “Studio Tour Sunday”