Skip to content
I can’t believe it’s been a week since my friend Sonja and I were in Peru, Indiana participating in Spring Fling machine knitting semimar put on my Charlene Shafer of the Knit Knack Shop there.
We had quite an adventure! Starting out Thursday morning from Toronto where I stayed over with Sonja, we drove through raining ice! The Weather Channel on my iPad showed a huge band of pink (ice) and we were trying to beat it. We got through without incident and I don’t think it was too bad as we only saw one accident en route.
After gassing up and picking up a Starbucks coffee we headed towards the border in Detroit. We were asked the usual questions…at least twice, like while holding our passports the officer asked our citizenship! A) the passport says we are Canadian and B) you can’t get one without proof of citizenship…both of which Sonja and I had earned through tests as we were born outside Canada). How much money did we have on us, where were we going, who’s car (mine) and so on until he handed us an orange slip and told us to pull over to the office and searching shelter. We were told to get out of the car leaving all our electronics. When asked if I had any weapons of drugs while my purse was searched I said only some Tylenol and a pocket knife. Grinning this officer told me not to pull the knife.
We went in and were grilled again for a few minutes: where where we going, then where were we going (again and again) when was the last time I had crossed into the US. When was the last time I crossed over at Detroit, how much money did we have on us?. How did we know the friends we had in the US? …. and on and on. As we sat  on the ‘group W bench’ (anyone recall the Arlo Guthrie song?) we saw some nice, normal, well dressed people come and go, then we were dismissed….and carried on our way. 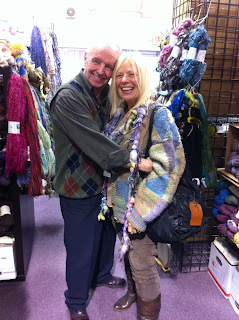 We were telling the truth, we were hitting all the yarn shops we could and went to Artisan Knitworks in St Claire Shores in the Northern Detroit area. Found it easily with an ATM (US cash) and a McDonalds (grilled chicken salad) close by. Well we thought we had died and gone to heaven!!! This is a large store with all sorts of hand dyed and hand spun and hand made yarns!!! Books, dyes, buttons…and so much more.  We walked in and a gentleman approached from a back room…that is Larry Hart, co owner with his wife.                                           Here’s a pic of Larry and Sonja after he had shown her the boa she is wearing, made of wool tops, yarn and ribbons. 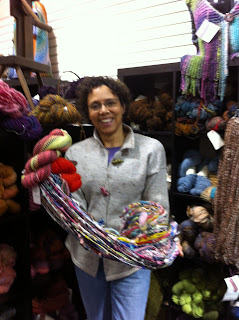 Here I am in one part of the store with some hand spun yarn that I eventually purchased….I’ll use it in my felting. The two tone yarn is made from ends from a yarn spinning business where the owner saves the ends and makes up multicoloured skeins (yum).  Her yarn is featured on the back wall of the back studio room where I also found some dye.  Larry’s wife designs and knits the sweaters we found displayed around the shop. 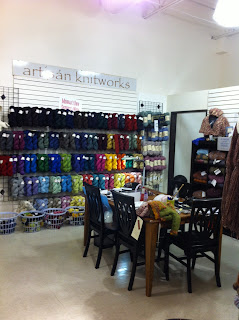 Workroom where lots happens, I got an email in a day or so telling me of upcoming classes and events. 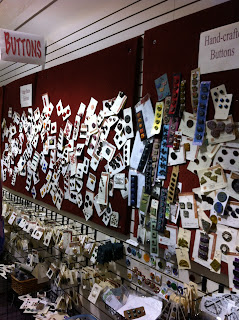 Now….if you want buttons, Larry has TONS of vintage buttons, beautiful, interesting parts of our textile history. I drooled over them….but had already put down $$$ for yarn.
Here is their wall of 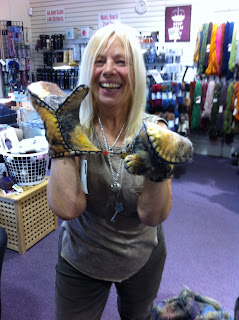 Sonja found some yummy felted mits. By this time we had our jackets off, had brought in a couple of things from the car, like Sonja’s copper dress, which we were taking to Spring Fling to display, and I was grazing through the excellent book shelf. We could have gone seriously broke here and it would be a regular haunt if we lived there!  I purchased some dyes and hand spun yarn….I have a scarf in mind and some felting……..

Oh, and we had a great time at Spring Fling and Peru. 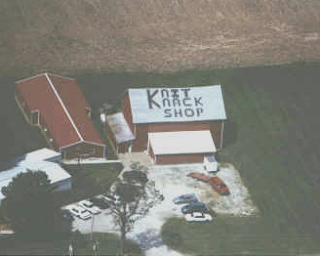 Studio on Tour Weekend. That’s another Kingston Art Tour weekend come and gone, lots of work – clearing out the studio of all my piles of paperwork, bills, bags of yarn and so on, tidying up and stashing boxes in the basement. Today I get to put all that stuff back! I had some great…

Last year on our way down South we got stuck in horrible traffic on our way though Hagerstown MD so we deeked off the highway and found ourselves on 15 Southbound towards Gettysburg. What a find…the countryside was beautiful, even in the rain, and we drove past a corner junction in the hamlet of Lucketts…

Oh, busy, busy, and so is Roxana. I love this vest and one like it that I sent to her at her shop L’ARTellier du Village in Pointe-Claire in Montreal sold on the snowiest day last weekend! Roxana is such a busy woman, running this fun ‘fashion and art and lots of other things’ shop…

Better colour.  My first effort towards an actual jacket shape using prefelt with silk and rovings. In my last post I had a photo of my first (ever!) dying, it was supposed to be red…but came out an icky pink so I dyed it with blue and finally got something I could live with and…