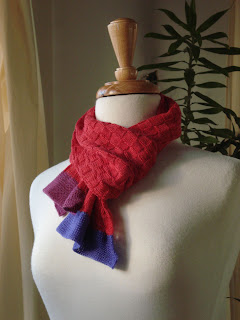 Oh, joy for a Thursday morning! Another item added to an Etsy Treasury. They come fast and furious but I don’t think any have gone out as worldwide Treasury emails yet but it’s so nice to be picked. I’m still working on a Treasury of my own, there are so many wonderful things….must think of a theme.

This is one of the scarves I’ve knit using my Garter Carriage….. not in time for any show however, the GC was seized up from lack of use and just wouldn’t cooperate…..until the Monday following the show….with me pushing the Go button over, and over and over and over….until she loosened up!

Though they are simple once the GC gets going it’s the choosing of colours, width and length that is fun.

It’s been suggested I write this pattern up for Ravelry….if it hasn’t already been done. It would suit both hand and machine knitting. I’ve also knit if of plain Merino wool. 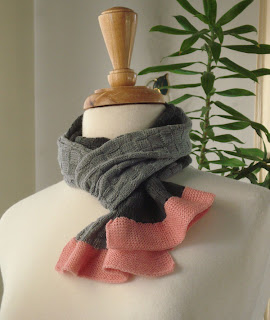 Lots of things to get to over the holidays while I sit on the sofa (rare for me) and knit socks or work on my laptop.

New things for a New Year.

One Reply to “Something Red – Another Etsy Treasury Item.”