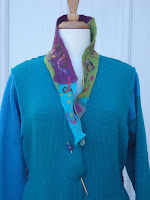 Felted collar in situ.
It’s been a very busy month since the build up to the One of a Kind Show, it was nice to be back in Toronto for the Christmas edition for the first time in more than a decade. I had been doing the Ottawa Ottawa Originals in past Decembers until the Chicago OOAK started in 2001, then it was there (except for my ’07 chemo year) that we went. 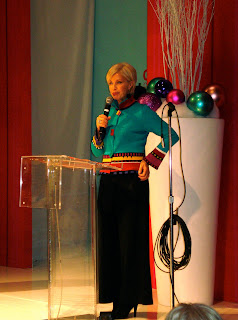 Here is Joey commentating the fashion show in one of my jackets.. the one that seems to have become really popular recently.
She’s great, always wears one of my items during the show, sometimes for the kiddy fashion show as my work is colourful. 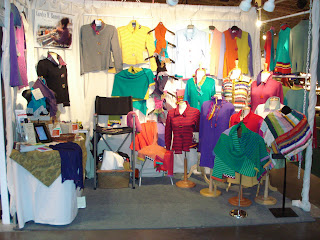 My booth was smaller than in former years, that was for budget and because I didn’t think I had a lot of stock.  Clint thought it was crowded  but having the corner helped expand my display space. I loved my spot, close to the centre and the fashion show stage.  That was were the half show booths were. 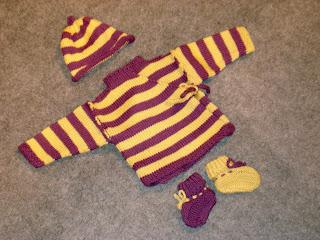 Here is the second outfit I knit for my impending grandchild. This is of a wonderful machine washable Merino wool…. darn it, I can’t recall the name just at the minute.
I saw it at Gwyn Gryffon  I couldn’t resist the two colours to make something a bit funkier than the last one. Same pattern though. Why mess with success! 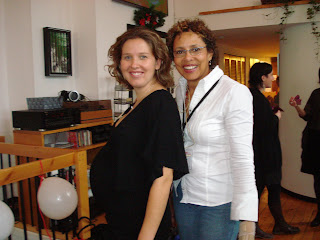 I managed to duck out during the show to attend my stepdaughter Alana’s baby shower and to see how she’s growing. She’s still working very hard as it’s the Christmas season and isn’t everyone?
Never having gone to a baby shower before it was fun and I wish I hadn’t had to get back to the show (don’t know why, Saturday is ‘tire kicker’ day…).
But I didn’t do well in the ‘cut a piece of string to the measurement of Alana’s waistline’ game, but her Mum and I were off by about six inches.

Then the clothes pin I got when I walked in was taken away when I was caught saying the word ‘baby’!    Food was great too and Jean Cliff (wife of Dennis Cliff), our fearless hostess and the third grandma, invited me to take some munchies back for the Granddad! 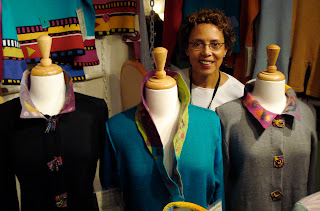 Me with my felted collars
Of my felted collar jackets I sold the black one to one of my clients who always orders blue. It looks stunning on her!  I’m very happy.
Gift Giving 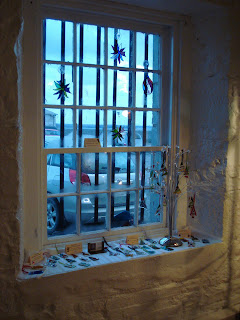 The weekend after the  One of a Kind saw me at Old Fort Henry in Kingston at the Gift Giving show. That was a wonderful experience, in a small barrack room which used to house soldiers now housed four artisans per room, 24 of us in total. The setting was lovely, and we all rushed out Saturday afternoon for the sunset over the lake. This show was well attended and the right people.  Tire kickers don’t go to an historic site for a craft fair.

Lindsey Fair did a grand job of organizing and running this.  In my nearly three decades I still stand by my feeling that the best run shows are run by women… from an artists point of view especially.  Anyone who has done shows for any length of time knows you need chocolate, tampons, water, a first aid kit and the like.  Duct tape, scissors… need I go on! 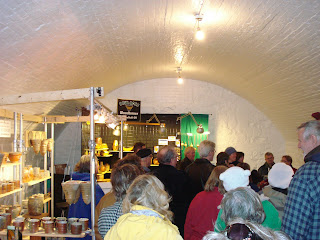 Here we are in our ‘go round’ before show opening on Friday afternoon.  This is one of the rooms. 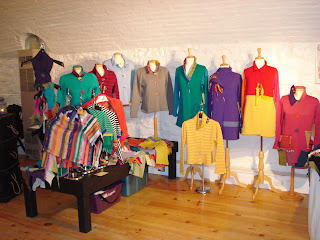 …and here is my display against the whitewashed walls of the room we were in.  Some of the other rooms had old brick of red or grey limestone.  I loved the white.

Business was brisk and, a plus, it was so great to drive ten minutes home each day!

Not Done Yet…
Whew! I’m taking a break from gadding about to get my studio in order and start my orders, not to mention catch up on necessary paperwork.  I just got back from New York City and viewing the One of a Kind NYC and will post about that next.

Well, we’ve had a good weekend, lots of folk showed up on Saturday and sales were made, pamphlets handed out and lots of chat, hot apple cider, sushi and cookies. Today is quieter so we’re taking time to explore the internet. Web sites on knitting, polymer clay and also looking at Etsy as I would…

Well, it’s been a busy few weeks since I returned from PEI. There was a workshop at Frontenac Secondary School that was very interesting as I have not worked solely with teenagers before and it was a unique experience! From deciphering teen talk & slang to figuring out what each individual was really interested in….

Andrea’s Jacket I’m overdue in posting these pictures of Andrea Orpana (my intermediate student) and her wonderful jacket made in my Haliburton class. Jacket Back She spent a lot of time afterwards finishing her beautiful creation. One thing I want Andrea and other machine knitters to become comfortable with is working in the loose ends…

Studio on Tour Weekend. That’s another Kingston Art Tour weekend come and gone, lots of work – clearing out the studio of all my piles of paperwork, bills, bags of yarn and so on, tidying up and stashing boxes in the basement. Today I get to put all that stuff back! I had some great…