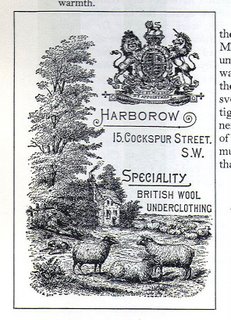 Well, cruisng the library for something else I found a wonderful book in the business section: ‘Shops and Shopping 1800 – 1914’. Yes, it really is a book about what it says. I’ve just dipped into it so far but I’ve decided that I have to find a copy for my own library in my studio.

Women have been hanging around to see and be seen, to pick up the latest fashions, to drive up and down (albeit in carriages) and so on, for centuries. This book is a wealth of information on anything to do with clothing in the 114 years before the first World War. I’m learning more about the vendors of silks, gloves, parasols, how they were made and marketed. I learned that the sewing machine, which I thought was invented in the US in 1832, was first shown in France in 1829 by a tailor by the name of Barthélemy Thimmonier, it was viewed with outrage by tailors when he introduced it into his Parisian clothing factory and smashed. Though the French Revolution ruined him in ’48 he showed it at the Great Exhibition in 1851 but no interest was taken in his invention.

Now, being of the knitting persuasion, I found the chapter on The Woolen Movement to be most fascinating. Dr. Gustave Jaeger expounded his theory on humans wearing animal materials (wool) instead of vegetable (cotton) and that this was’sanitary’. The illustration shows Harborow’s which, in 1887, had a ‘worldwide reputation for their pure British wool underclothing for gentlemen’. Seems to me men were made of sterner stuff back then!!!

At that time men were wearing hand knitted ‘Jerseys, Cardigans, Vests, Spencers, Combinations, etc…’ However, these were of the finest, hand spun Shetland and anyone who knows has felt the softness of that yarn. Growing up in the ’50’s (… no, no, no, the 1950’s … I’m not that old!!), babies and kids wore woolies. Before central heating and in a damp climate there’s nothing better.

Still wandering through this tome and loving it. I’ll post from this book again…. fascinating for anyone in clothing and wearables.