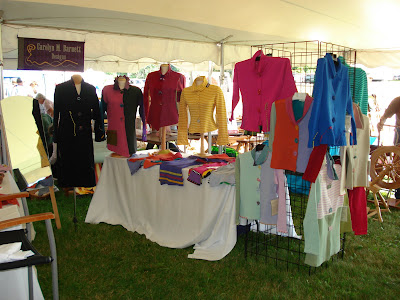 So much has been going on since the Gallery Show but one thing that I have done for the past few years is the local Sheepdog Trials run by Amanda Milliken. It’s at Grasscreek Park where the McLauchlin Woodworking Museum is located.

I didn’t get to park my display next to my friends Ann Woodall from Wool Tyme or Jane Thellwell from Anglin Bay Pottery but at the other end of the tent next to where the Sheep to Shawl event would be held on the Saturday. It is always fun each year to watch as the women grab their chosen fleece, comb, card, spin then weave it into a shawl which is later judged. The have four and a half hours to do it all. To women I know were on the Kingston team so I was rooting for them. 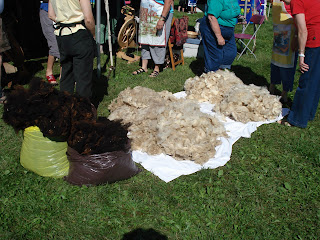 I got to peruse the fleeces as they lay in the sun awaiting the start of the competition, there were two light ones and I think three dark ones, beautiful and full of lanolin. 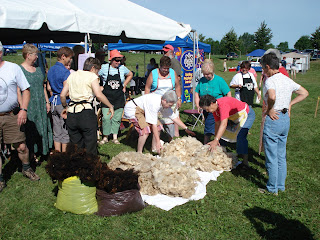 The looms are already set up with their warp, the Kingston Weavers, and my old supplier Roberta McKinnon, had a warp of green gradient. Starting with a lovely very pale green and on to a darker version of the same shade of green. The shawls are to be at least 72″ long so there’s lots of room for that sort of variety. 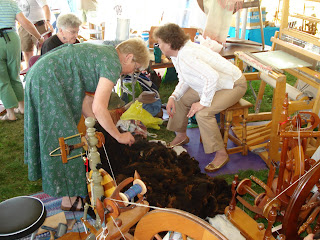 It proceeds with the team members picking twigs and dirt out of lumps of fleece that they are going to comb and card, then spin. The reels of spun yarn are quickly passed to the weaver who puts them into her shuttle and courses ahead.

I got to go around and see how they were getting on and also what kind of pattern they had set up…. unfortunately I didn’t take photos of the finished shawls!

The ends of the warp are worked into tassels or fringes to finish off the shawl and then they are judged. The Kingston Weavers took second out of the four.

It was only after this three day event that I felt my Summer started… but much work to be done and many orders still to fill before I head to Inspiration 08 in Cleveland and then to Britain with my sister, accompanying my parents to help them celebrate their 60th wedding anniversary.

I’ve been to the beach once, in a swimming pool once and now it’s cool weather!!!! Anyway, I’m exhausted from all that has gone on this Summer so far. But I did get to go to Bead ‘n’ Bitch held by Lindsey Fair who beads with beach glass that she collects. The evening involved four other women.. and some wine! Lindsey started out by asking us to identify ourselves and tell our passion and our bitch!

I made a necklace with three strands of tiger wire choosing from Lindsey’s collection of beads. I’m not a necklace person but I’ve worn this one so much since I made it. There will be more classes, I want to learn how to wind wire around stones and glass. 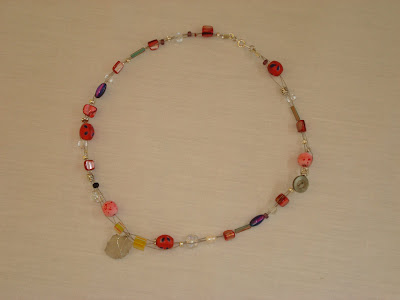 Well, I know it looks in these pics like I’ve been skiving off from the studio but it got so hot I just couldn’t function in the studio anymore the last couple of weeks. I’ve a studio full of windows and a skylight, ceiling fans and a breeze from Lake Ontario a block away but…

This lovely puddy tat was captured taking his afternoon (and if I know cats – his morning and evening..) nap under a price tag of $5. This was at a fruit and veg stand on our way to Picton one sunny afternoon and we stopped to pick up some fresh produce. The whole time…

What do you get when you invite a friend to your house who is building a home? Brownies tied up with some of the cord they used to haul something up to a second floor. I did ask if they needed it back…. did what they have left still reach the ground? They assured me…

Just a quickie with some news:* I have about a 1/4″ of fuzz on my head. * Three of my garments are being shown in Sandra Whitton Gallery for the next month. Kingston’s Downtown Art Walk is on today until 10pm…. I’m going no matter how cold and snowy! * SWGallery open house December 1…

Recently at a studio open house I ran into a friend who had a two day old duckling with her. If staying home isn’t an option on a sunny Sunday, take jr with you in your latest felted bag!!! Here he’s surfaced for refreshements! Just ducky!

It’s two days until the Maker’s Hand show in Picton starts, it’s three days long with Friday being 10am  to 8pm. That means leaving home (at least I get to sleep in my own bed) at 8:30am and getting back about 9:30pm. If we can catch the right ferry coming home it’s fewer miles and…