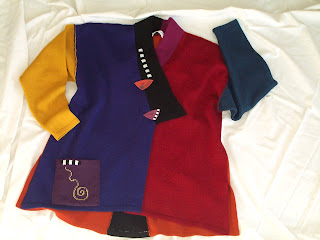 On a recent trip to the beach at the Sandbanks in Prince Edward County we planned a stop in Picton to acquaint ourselves with some of the new shops. A comment on a friends ace leather jacket led me to City Revival, a huge and wonderful use clothing store that is like a recycling Holts or Creeds!

The clothing there is very chic and recycled out of Toronto and a good place to keep your eye on as they get in shipments of designer clothing, often. They have been there for seventeen years! (where was I?).

After my friend purchased a great Alan Cherry raincoat we moved on to the book store down the street which also joins onto a coffee shop and while getting coffees to sip on the next leg of our drive to the beach a woman called my name, we had said hi in City Revival but now we realized we knew each other….. this was a woman who was deep into machine knitting and sold me one of my favourite machine from her old business in the County, years ago!!!! It was so great to rediscover each other…. and she did look very smart from working in and hanging around the shop.

Carol told me that they have had my sweaters through their store, they go for high prices (still) and don’t last a week!!! I didn’t know how to take that but then realized I was flattered that my work lives on, is making money…. (for someone), and sharing fashion wealth.

Just a quickie for anyone who might like to purchase a Knit Knotes note book…Blurb has an offer or $10 off if you order using the code Until March 31st SHARE10 Knit Knotes Get one for yourself for and one for you BFFF (best fibre friend forever)! Blurb… Inside are lots of line pages for…

This little one I was knitting this one while I was at the One of a Kind Christmas in Toronto  (…trying to avoid US economy!) trying to get it done in time for my stepdaughter’s Toronto baby shower.  It was the Yoda coat and a little hat and some booties worked from some wonderful…

You MUST, MUST visit this wonderful store in North Bay! It’s like a few yarn store I’ve visited in my travels, the one I hit in Washington DC, Rose Haven Farms in Picton and a few more…. the choice of yarns is fabulous: cashmeres, possum, bamboo, cotton/tencel the list of fibres goes on.  However the…

Well, a while back I started to put together my knitting notes and some instructions into a book….hmm still working on that, it’ll take a while as there’s a lot of writing. Then the software I was using announced they had added ‘Notebook’ to their stable of formats and after taking a look at a…