Well, the November meeting of our polymer clay
group in this end of Ontario was attended by just 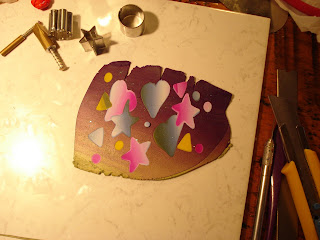 Georgia and me. However we got a lot done. I wanted to learn about Gera Scott Chandler’s ‘fabric’ claying as I might be able to use it on my buttons (which might lead to a whole new sweater design!)

The piece you see here seems to be mine as Georgia showed me another way to do the Skinner method on two pieces of clay and them combining them with cutters from one piece to the other.

Our aim was to make some Bottles of Hope to give two to an old and dear friend of mine who is wrestling with cancer and I was to visit him later that day. 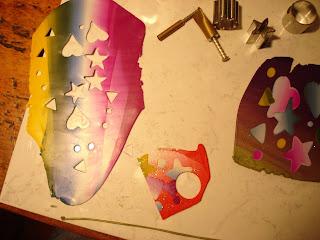 It was a huge amount of fun and I really learned. I made some buttons using that technique which I will post on my web site ‘More’ page soon. I seem to be selling my buttons at every show to hand knitters and some of them never get posted. 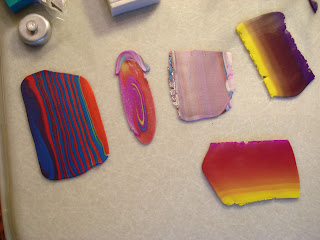 You can see some of the cutters I use: heart, star and small round for dots.

Here are some of the coloured Skinner method bits that Georgia made for her bottles. She had some larger bottles so they were easy to do and we had fun deciding on what kind of stoppers to make.

Here is what we ended up with. I was sooooo excited about what I had done I selfishly decided to keep one for myself. I think I will eventually take it down to the chemo room at the Cancer Centre of Eastern Ontario where I have just two more treatments to go. 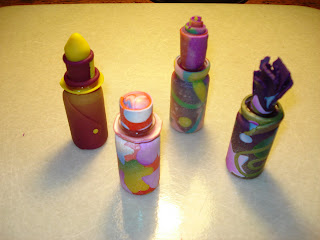 The red one with yellow and the pink swirly top are Georgia’s.

I was privileged to be in the chair next to a chap who was given a few months to live back in 1993 and we chat when we are in the waiting room at the same time. I told him to choose one from the selection and he was thrilled and said he’d been coveting one particular one.

I’m, at the moment preoccupied with my luxurious head of hair….. OK…well the fuzz that seems to be staying despite what the symptoms sheet of the Paclitaxel tells me…seems like a full head of hair to me! Even my left over stubble seems to be getting longer. However I only possess about 20 eyebrow hairs and three five eyelashes between the two eyes! Until I have to deal with more serious stuff after the chemo is over I will allow myself to be vain. I won’t leave the house without eye makeup.

I only have to deal with ‘fluey aches, heartburn and night sweats but am thankful I don’t seem to have the neuropathy (numbness and tingling in my fingers and toes) I have a bit of pin’s and needles but I am able to type and knit and generally do fine work! Yeah!