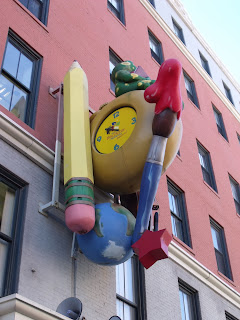 Well, I got lost in Bangor but I then ‘dyed’ and went to heaven!  This sign was outside a building for  children’s art and activities….it is so fun, the classes must be super!…there’s a violin on the other side! Anyway, I digress. While hunting for Stephen King’s house in Bangor I followed the directions of the lady on the desk…but it’s difficult in a city that has a ‘Broadway’ and a ‘West Broadway’ which are two different streets. I drove around, across the Ponobscot River…and back and downtown, at least it meant I got to see enough to know I want to go back…. a lovely town. 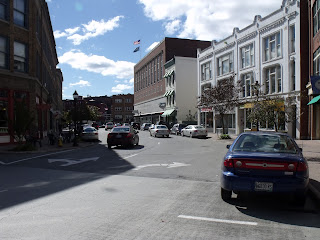 I came down a hill and stumbled upon this lovely little street with some whimsical stores on it and a bridge over a small river. I had to pull over and wander around looking at the stores and architecture which was old and beautifully preserved. I think this is Fairbanks St. 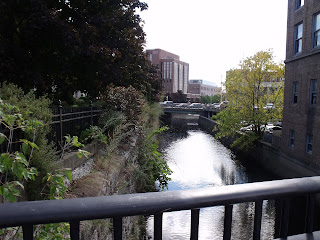 Here is a shot off one side of the bridge. 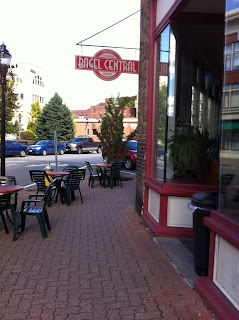 Around the corner from the bridge was Bagel Central, which looked to be a likely place for a sandwich for the road…boy, had I struck gold! I couldn’t make up my mind, such an array food, but settle for a BLT with cheese on a whole wheat everything bagel…then I was offered a ‘side’ I chose potato salad, it all came with a pickle and the lot did me for my lunch in Maine and dinner in New Brunswick!!!
I popped back in for a drink and  huge crispy apple then carried on looking for Stephen King’s house. 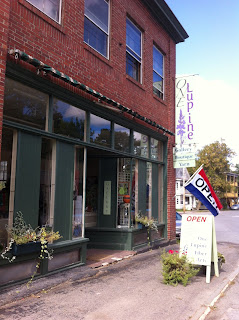 I stopped a woman on the street for directions and in following them I drove past a shop with the word ‘fiber’ on its sign….of course I screeched to a halt and pulled into the first available parking spot…that’s when I thought I had died and gone to fibre heaven!

Lori of One Lupine, welcomed me even though she was busy and had just opened…and had work on a wall in the studio happening today. She told me to go downstairs to the studio…. 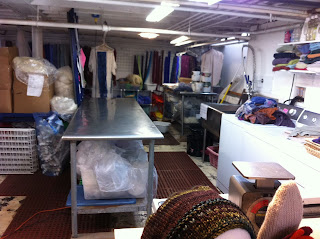 …this is what I found! Her yarn shop where there were bins and shelves of beautiful yarns, rainbow dyed, hand dyed, dyes, felted items…and her studio…I’m pea green with envy. Washing machines, (top loaders!!!), work space, tubs and room to hang stuff. 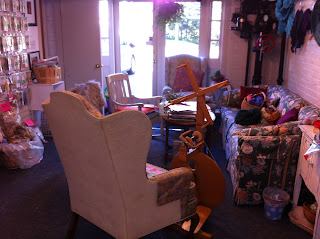 At the other side was a back door to this lower level where there was a nice sitting area, for classes, to peruse patterns? Also an alternative for ladies to reach if they have trouble with the stairs. 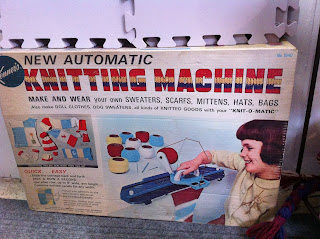 I spied this knitting machine box on the stairs…Lori said it wasn’t all there but it looks like a predesesor to a Singer HK 100 (which I got in 1984). I picke up a Knit magazine and some packets of a dye I haven’t used before, got some information on a fibre show she is doing this weekend and had to leave…I could have spent the rest of the day there.

Now safely off the highways and in my room in Charlottetown I just saw a news item on TV about a moose which had to be shot as it was too close to the highway. The rangers said they couldn’t tranquilize it as it’s days away from moose hunting season opening and drugged it would have been an easy target. I remember passing a pick up truck with a trailer and a dead moose on it…right time, right part of the highway…I saw that poor moose!
Oh, by the way…I did find Stephen King’s house!
I definitely want to return to this part of the world…no I didn’t make it to Bar Harbor.

I found this posted on by one of my Facebook friends and found it fascinating. I’ve love John Cleese over the years in his many incarnations and this talk about Creativity is thought provoking and also cleared up a little about the way I think! Enjoy!

Who’d a thunk it. On vacation and I didn’t pack my sock knitting stuff…on purpose. First…there are too many ball of yarn to pack as I knit my socks from about a dozen different self patterning balls each. Second, thought I’d give my left thumb and wrist a rest. Anyway, I’ve got to spend time…

…….to my business! June 2nd just came and went and I totally for got to celebrate. June 2nd 1982 was the day I went downtown Toronto and registered Carolyn M. Barnett Designs and started the mad knitting career with hand knitting. I’m still kicking! (albeit slowly just now). This charming bit of knitting was what…

Well, the salt from the sea is washed out of our bathing suits and our tummies are returning to normal after bit if holiday ickiness…and we had a great flight back home. Doesn’t often happen (too bad) but our head purser on our WestJet return flight on Sunday flight was a chap called Patrick. First,…