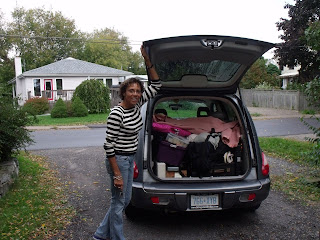 Well, damp and early I finished loading my car…sweaters, knitting machines, some promo stuff, extension cord at the last minute, some old mags that the ladies might like to dig through…and hit the road at 9am….of course half way through New Hampshire I realized I hadn’t packed mylar sheets for the electronic machine…maybe Edith  – Glen Valley Knits  – can come to my rescue.
Hit the border at Prescott, where I picked up a Timmy’s sandwich combo, and made sure I could get my stuff a)through the US legally and b) back into Canada with my all the right paperwork, (importer’s number and checklist). Then headed off through New York state for the start of my excellent adventure. The scenery just kept getting better but Vermont is just the best! 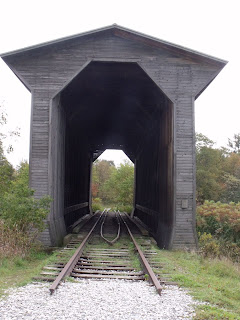 So much to look at but I had to stop to take in this beautiful covered railway bridge, Fisher Bridge in Wolcott VT spanning the Lamoille River. I ran along where the tracks used to be (needed to move and take in some oxygen) to see that they are still in the bridge. I walked along and into the bridge and for some reason it really spooked me…so big, old (1908)…I couldn’t go deeper in, it’s so huge when you are standing in it…and I’ve been in covered bridges before. Maybe it was the tracks…I dunno! 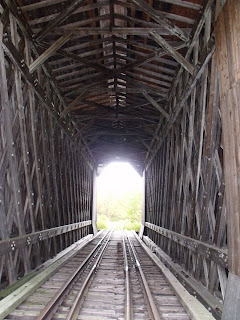 You can see how it is built and held together inside. 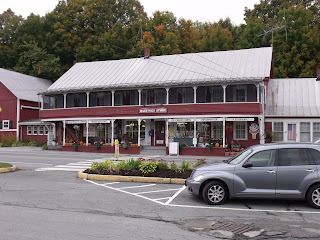 One gas fill up (yes, it’s cheaper) and a few towns later I pulled off the road to take in this great old General Store…there are a few of them in these states, that are quite old and have history.
This one was built in the 1880’s but the same family has had it for 99 years. There is a lovely lady behind the counter who is third generation and I heard that the sixth generation has just been born! There is a picture of her grandfather in the store. 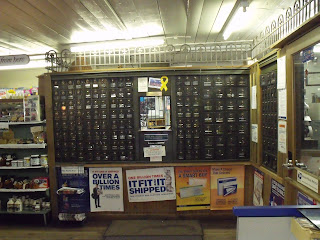 They still have the old post office which came with the shop, though it was originally in the Western Union offices…wherever that was (the proprietor said).

They had shelves of books on the front porch with a sign telling you to help yourself. Then the far left end is a gallery/shop of beautiful handmade crafts and furniture from the area. Fine woodwork, the manager is a weaver who had her loom set up, two fiber artists, of course we had to chat. Then I couldn’t resist some hand made soap and maple syrup. When I paid for the syrup I had to NOT look at the carrot cake on the counter!!!! 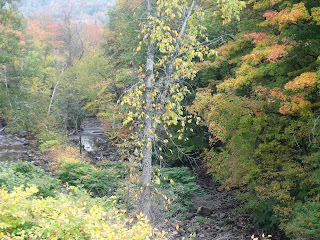 Across the road from the store was this river flowing from a dam and off into the mountains. It’s hard to tell but the colours are beautiful and nearly at their peak. I’m so sad to be through Vermont…it’s so beautiful. We once heard on a NPR radio program that some Vermonters were trying to become Canadian!!!!

Later I saw this river (the same one?) and had to stop to take it in. Some people were climbing up the bank and I asked if there was a good vantage point down by the water, the lady opened her mouth and I asked her what part of the UK she was from!!!! We had a great chat and I recommended Canada…she said that was next on their list for their trip over here. 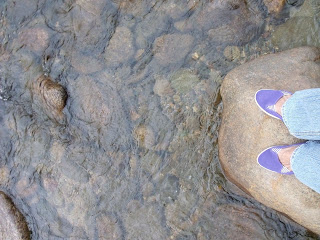 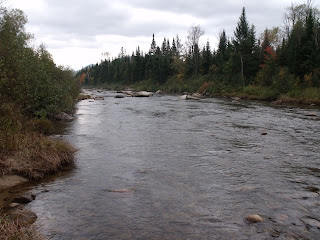 I’m sitting in a motel now which I had suggested when I pulled into a Bangor gas station, not having any idea where I was. I said I was from out of town and needed a place to stay…one nice chap said ‘go here as I work there and really like it and it’s cheap. Tell them Garret sent you’. Then I had a lovely chat with the bloke on the desk…who gave me a discount with my CARP card.
Well, I’m going to explore a bit and see if I can find Stephen King’s house tomorrow before I head out.

As I knit my way towards the One of a Kind show and Sale ~ in Toronto this year, first five days ~ the phone rings….is it library telling me I haven’t returned a book on CD (they found it eventually), a bill I’ve overlooked or good news? Great news, I’m back teaching another week…

For Machine Knitters Well, this has been too long coming, I shot the stills about 18 months ago and Dad and I shot the video last Summer. I took a while to get it edited then the push was on for the end of April when I was demoing in Purls of Joy in Minneapolis…

Long time since I have posted here. I’m currently in Britain’s North with my parents on their 60th wedding anniversary trip, long awaited and can’t believe we’re here. Surrounded by cousins who are no longer the little kids I had to play with when young (I’m the eldest) they are great middle aged adults we’ve…