No, I don’t mean I had a Politically Correct afternoon, it’s Polymer Clay. I belong to the EOPCG or Eastern Ontario Polymer Clay Guild…. a small group of clayers who meet once a month to work with the clay, exchange techniques and ideas and such. It’s not written in stone, I’ve attended with only my laptop when I’ve had other pressing work just for the company and to pick up stuff by osmosis. One of our number last Friday had to knit a pair of stunning baby booties in a hurry so we nattered while we clayed and she knit. Her life is frantic (aren’t all our lives?) and we were just glad to have her there.

The group is headed up by my friend Georgia of Beek’s Lane Studio (check out her link over in my list in the side bar) and ages ago she made some cord with some Bake and Bend. I found it in my stash and she pulled out a couple of knitting needles she uses for tools and voila! the knitting you see here!! 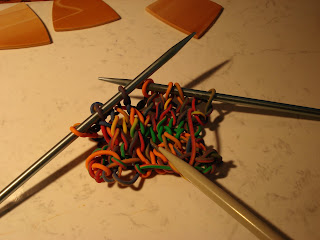 I did learn something new and valuable that had me whooping with surprise…..these buttons were just a couple of shapes waiting for me to do something when G got out her extruder to show another member how to work it. I hadn’t used mine in ages and thought I’d just make some cord to twizzle onto the buttons in some fancy pattern. I looked at the colouring in the cord we used for the knitting and started to load my extruder with colours, (I had put in the tip with a triangular hole) …. chartreusey green, then a periwinkle then pink then more green …. then I pushed, and pushed and pushed, while nattering, and pushed and out came a neat long strip of green. I wondered when the other colours would come out when G explained that the one colour comes out inside the others, so I cut in the middle and Wow! pink inside. I just kept cutting and putting the little pieces on the buttons. 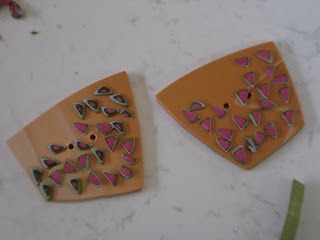 Now I have three buttons like this… I’ll have to design a sweater for them to go on!

The Gang in the Upstairs Workroom. Well, another polymer clay Button Making workshop at the Thousand Islands Art Center in Clayton NY successfully completed. Not a huge class, I’m used to 10 – 15 but the five lovely ladies I had this year consisted of the three ladies I had last year and two newbies….

Whew, what a fun September! Where did Summer go?  I took up SUP (stand up paddleboarding) and discovered a wonderful new passion…one that I can share with my husband. I took my board to Dorthy’s Lodge a couple of weekends ago for the VayClayTion, a retreat with a pile of wonderful polymer clayers. This event…

Just a quickie with no photos but after a trip to visit a plastic surgeon yesterday I feel so much better about any pending mastectomy! Left thinking ‘Hey! the upside of all this (besides some weight loss) is new hair and maybe even new boobs!” Now for pics and some hair and boobs but in…

I had a great workshop on Monday with a group of women here in Kingston and while I was fishing around for photos to put in this post artists Alana Kapell, who organized the day, sent me a ‘story’ of they day. Check it out. we had a super time with even wine and a…