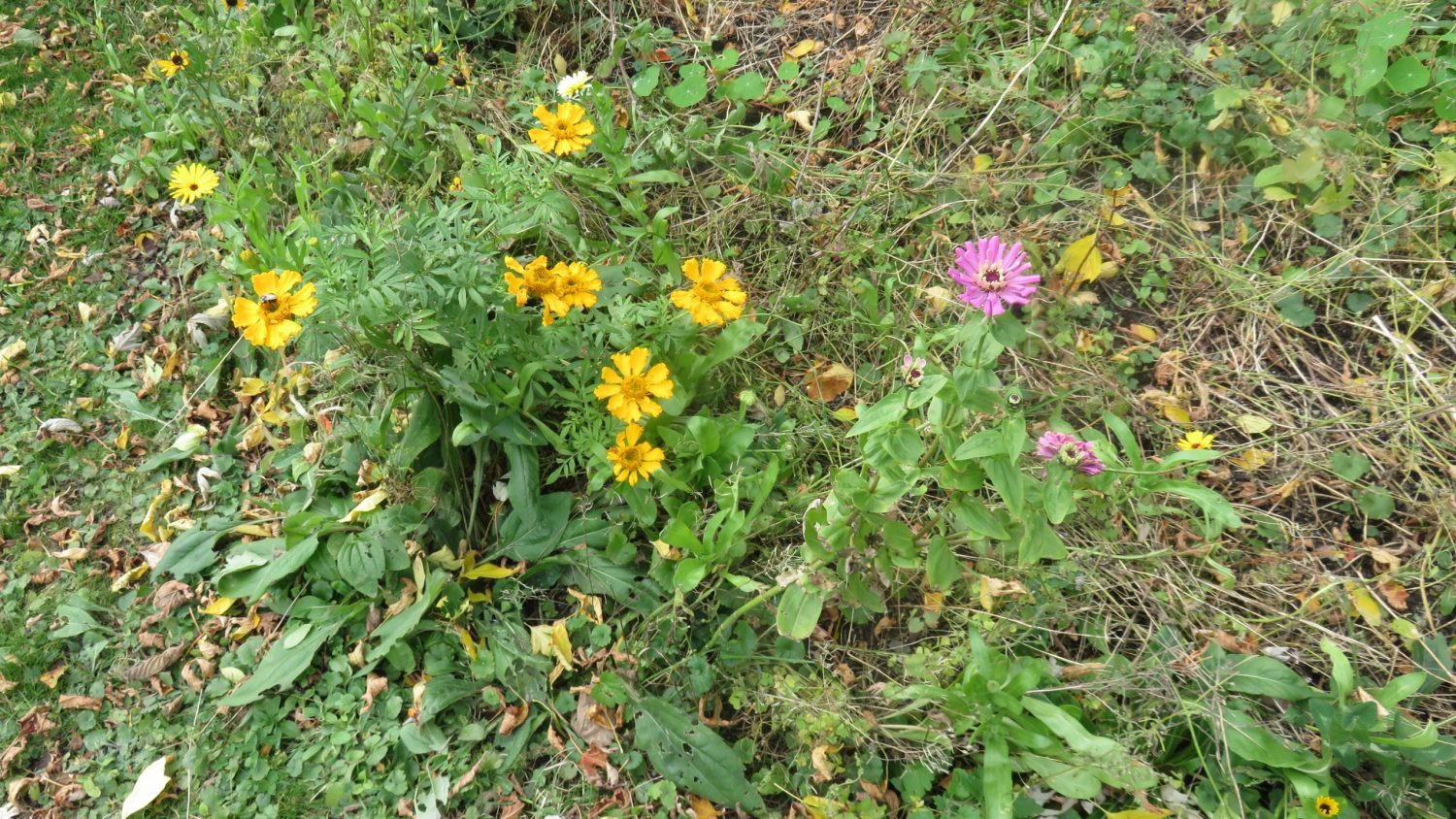 A couple of days ago, though it was windy the sun was out so I thought it would be a good day to empty some of the pots I plant up to decorate my deck and porch. I will have months with pretty much only my studio to hang out in so I was taking advantage of one of our last nice days. There is still colour and inspiration to go with the fresh air and sunshine.
Some of my plants will survive the Winter in my basement with a light on a timer, some just need to go into the compost now.

I took time to walk around my garden looking at everything and every corner to see what I might find, what needed attention and just enjoying it.

These are the pots that I’ll leave for a few more days as I so enjoy having the colours still. The geraniums are doing OK for now and so are the potato vines and a couple of begonias but I’ll overwinter the geraniums in my basement again.

I’ve over wintered the geraniums down there but I have to try to remember to water them…I’ll go down and see some dried leaves and a blossom or two….stretching towards the light. There is a small window which is on the Sunny side…I think my spikes benefit from that…2021 will be their fourth year!

This is one of our four hibiscus plants which have graced our deck this Summer. This year I don’t think I’ll over Winter them as I have done for many years…I am tired of wrestling with the scale that seems to thrive on them. No other plant in the house is affected but these get covered…even after spraying them and the soil before I bring them into the house.

I’ve cleaned them, trimmed them way back…on the advice of friends who know more than I do but this year I’m done! They’ll hang in there on the deck for a while more as we don’t get frost early as we’re near the lake.
I love sitting on our deck through the Summer knowing that I might have a hummingbird visit these lovely shrubs. The only way I really know is a slight movement in the leaves and that telltale humming of their wings.

When we moved into our house there were these steps going up one corner which I used lots to walk to the new Tim Hortons a couple of blocks away. Well, over the years they were grown over and lost. Last year we uncovered them, dug them out…the metal posts were still there…and with new boards and some fresh soil we had a place to plant Hostas.

They thrived but now they are cut back and will sleep until Spring when we can enjoy this unearthed but now planted stairway. Just above the stairway is a pine tree on next door’s property but it has a wonderful vine crawling up the trunk, from the fence, which has turned red.

Turning around I look at the three trees the city planted to replace the row of Chinese elms which graced edge of the road when we bought our house. The lady and her daughter who lived in our house in 1945 came by about 23 years ago and said ‘That’s what happened to my hedge’! Now there are two maples and a locust. The middle maple is now old enough to turn in the fall for the first time.

At the bottom of our garden (and the two next door) is the pond. Apparently it is the end of what used to be a stream going further up in the village. It nearly ran dry in September but is now full with even some of the heritage (I believe) watercress (right) which I should pick and eat. We have had up to 30 ducks hang out for a week or two in the Winter when the lake is totally frozen. OK until you realize they are eating every plant in the pond: water lilies, cress and whatever we had planted. I have one lily hiding under the irises (left). The pond was full of leaves from the surrounding trees but if the rain continues some of them might float out through he conduit at the other end which we were told exits at the lake.

Well, my window box just keeps chugging along! When the pansies I plant every Spring keeled over and begged me for mercy I replaced them with some plants I found in a garden centre. Streptocarpella ‘Concord Blue’ and Diamond Scaevola both keep growing and popping out flowers. There’s an Impatien that found it’s way into the dirt in a basement window well which I moved. Despite the threatened Downy Mildew they have been wrestling with the past couple of years mine did well.

The photograph at the top of this post is of the few remaining flowers pushing through in what I call my meadow. I wanted a beautiful patch of blossoms I could pick all Summer and I had it two Summers ago. Digging over a spot where a blasted Black Locust tree which looked lovely when it was a small bush and blossomed. Finding it is invasive we took it out and turned over the soil, added more and got busy with seeds. Year two however was mostly sunflowers and this year I had a mass of weeds – Devil’s Beggartics. My husband said wait until they bloom…they never did but the choked out all my other flowers!!! 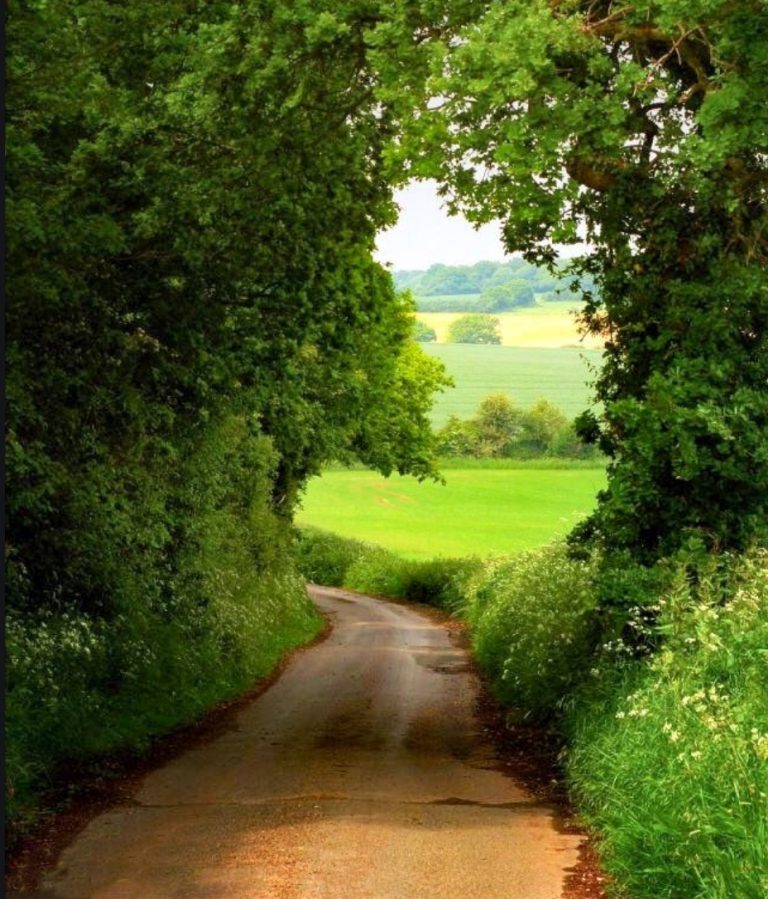 “Oh, to be in EnglandNow that April’s there,” Robert Browning wrote in his poem ‘Home Thoughts from Abroad’. We took this in school when I was a girl in England and I remember how delightful it was when our English teacher talked to us about it and told us about folk in the 1800’s travelling… 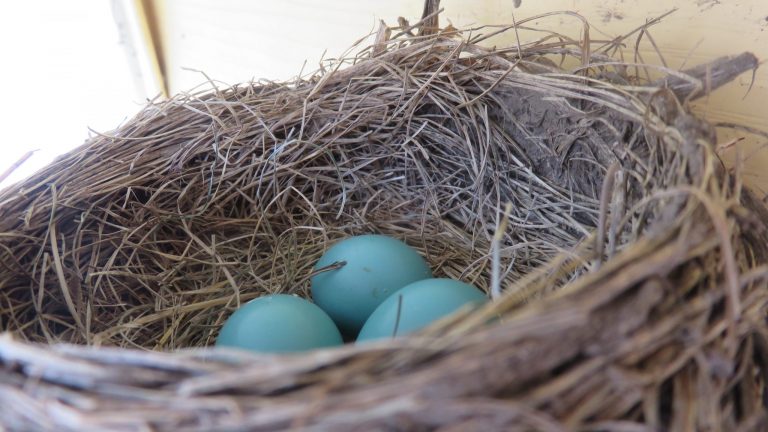 I decided this spring that I have a love/hate relationship with nature. What brought this to a head: Live plants…dead birds. We usually have a nest somewhere around our house each Spring, used to be on a folded back screen on an upstairs balcony door…we took off to North Carolina, something we’d been doing since…

This phrase has taken on so much more meaning in the past 16 months. At first we all thought we’d be locked down for a few weeks then things would get back to normal or would die back…but no and working from home, ordering groceries in or venturing out early in the morning to shop…