Skip to content
Yesterday was September’s Artists Round Table meeting and, thanks to Denise Love of Lovetheworld photography, who volunteers at Modern Fuel Gallery in downtown Kingston, that is where we met.
I haven’t been to the Modern Fuel for ages and was pleased to see the old building is getting smarter and smarter over the years. When I first moved to Kingston I went to an opening there where I got to chat with Nan Yeomans over a couple of lovely little watercolours she had painted of boats in Hatters Bay (now Portsmouth Olympic Harbour).
We were met and hosted by four of the staff….
Michael Davidge,  Artistic Director  http://michaeldavidge.blogspot.com/
Christine Mockett, Administrative Director
Riva Symko (President)
Jennifer Wakelin (student volunteer)
The current show which we saw, The Rough Edge of Beauty, which ends this Saturday was very interesting and diverse:  Jessica Marion Barr, Mackenzie Browning, Decomposing Pianos (Owen Fernley and Julia Krolik), Frank DeSa, Rebecca Houston, Maayke Schurer, Su Sheedy, Andrew Sims, and David Woodward. It took me a while to become more familiar with some of the pieces but the became more fascinating as time went on. This is in the main gallery. 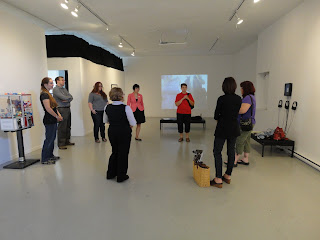 The State of Flux Gallery is a small side gallery for the exhibition of art limited to artists from Eastern Ontario. The main part of the gallery is open to exhibition from artists from just about anywhere.
This is not a gallery for sales (unless a viewer is put in touch with the artist) but for exhibitions of various artists’ work. It is funded by the OAC, Canada Council and Kingston Council for the Arts. The shows change every two months.
They would also like to involve Queen’s art students to have their portfolio’s reviewed.
Modern Fumes is their newsletter to which you can subscribe by becoming a member…http://www.modernfuel.org/get-involved/become-member
I started going to shows when I first moved to Kingston in 1995 but the gallery has been running since 1977.
Nicole asked about the sparseness of the current exhibition and we learned of the fees paid to the participating artists which must fall within their budget…the exhibition was really cool though!
I’ve always loved the side of the building as I drive along Ontario Street.
“The gallery is currently situated in a heritage limestone building that was constructed in 1848 to house the City of Kingston Gaslight Company. In 1849 George Herchmer Markland sold 1/5 acre to city of Kingston Gaslight Co. which was bought by the city of Kingston in 1904. It is this company that advertised “GAS” as “THE MODERN FUEL” at the turn of the century, a slogan which remains painted to this day on the side of the current building at 21A Queen St. (pictured above); hence the origin of the name, the Modern Fuel Gallery”. (taken from the Modern Fuel website).
You can join them on their Facebook page and follow Michael’s blog.

What a weekend was last weekend! It started on Thursday when I was part of a four artisan delegation who set up in Brockville ON at 55+ Canada Games. We set up in St Lawrence Park overlooking the St Lawrence river and 1000 islands, it was beautiful, I set up my knitting machine and got…

Long time no post, been very busy and don’t seem to get time to write. Anyway, I just had to today right before we leave for Toronto to participate in the Toronto Outdoor Art Exhibition. This will be my 11th year and I feel very fortunate to be juried back in once again. I was…

Last week my friend Yvonne said I must go downtown to Gwyn Gryffon (needlepoint, knitting and winery) to help her choose a needlepoint for a Winter project. She pops over to my studio in the evening now and again with her lovely yellow lab. We chat while I work so this would be a golden…