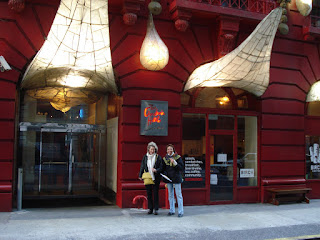 Margot and me outside our hotel… The Gershwin.
This is what my old college roommate wrote in a Christmas card a couple of decades ago!  I do hope that everyone did have a Merry Christmas and/or Happy Holidays (to be PC).  After shows, my Mum’s 90th birthday and a flying visit to New York City I wasn’t ready…. consequently I will be sending my cards out sometime late January!
View from our window, over 5th ave & Broadway. 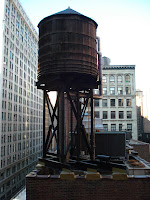 I had decided to hit NYC to look at the One of a Kind show there in it’s first year way back last year while doing the Chicago show. A not great year meant my other half and I couldn’t really afford the whiz bang trip we had planned and he had to stay home and work so when my friend Margot Miller asked if I wanted to go I jumped at it. She is a seasoned traveller and suggested the train out of Syracuse, a two hour drive from Kingston…. but oooooh so cheap!  The five and a half hour trip seemed like a dream to me after two shows and party prep. Five hours to relax, snooze, work on my laptop, stare out the window.  We prepared by my filling a thermos with soup and getting munchies from the bulk food store, some fruit and Margot made a huge salad. This meant we had a great lunch on the train wile watching the scenery roll by. It was so relaxing not to have the hassle of airports, screening, packing properly etc, then landing a $30 cab ride from your hotel! We had a five block walk from Penn Station. 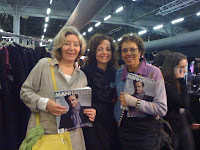 We high tailed it over to the show on Pier 94 (memories of doing the NY Gift show with another artist back in the 80’s flooded back for me) and ran into all sorts of folk we knew. It was a small show, about 250 and high end like the Chicago show. We were there for VIP night and got the royal treatment including bubbly and snacks. The fashion show was great and we ran into Patty Stewart VP of the OOAK TO who Margot hadn’t seen in ages. We chatted and caught up our way around the show for two hours, then met up with friends Jeff and Susan Watson Ellis for a bite to eat.
Margot, Patty Stewart and me at the OOAK 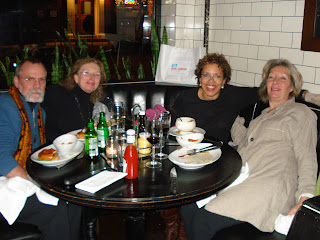 We went to Five Napkin Burger for great eats. I had one of the biggest bowls of French onion soup while the others wrapped themselves around burgers. The atmosphere and food were great, getting a cab back to our hotel was difficult, Thursday night they were all full and whizzed by us standing on that cold, windy corner. 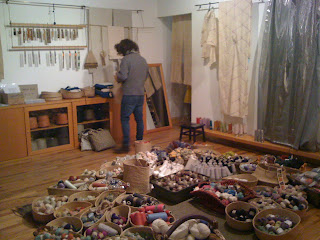 The next day we  headed out to do as much as we
could. I had found the locatios of Habu Textiles and that was a short walk away as we were already in the garment district.  Here is a young mad from Parsons buying yarn for his thesis project. The baskets of yarn on the floor were for retail purchase, I got a couple of cones of Silk Stainless and we both came away with a full catalogue which was super. 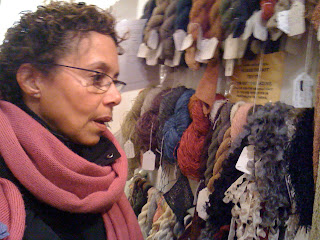 Here I am lost in a tiny room off to one side full of skeins of the different yarns Habu imports from Japan.  Silver was one of them! 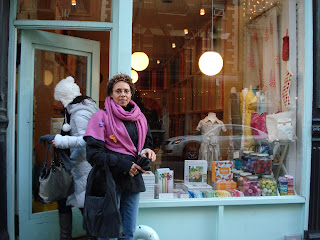 We made our way down to Soho to visit Purl, a knitting shop I keep seeing advertised in my Selvedge magazine. A tiny store with the usual lovely yarns but I was interested in the bits and pieces around the counter and on display. While Margot got lost in a Rowan magazine with pictures of England I poked through notions, accessories and all those wonderful things you find at any checkout counter.  I came away with a Knit Kit and have never regretted it. I now have every tool I need when  hand knitting (with the addition of a tapestry needle that I put in), all in one chic case, do check it out. I wanted the white with purple but was told they only make black now. 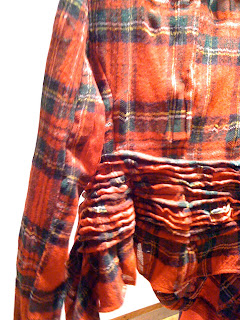 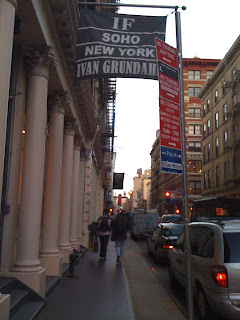 Seen in a shop window. There were more but I was already dragging out my camera at every turn…. but isn’t this cute?    We also found some really cool clothes in a store called IF, the red plaid jacket above is Ivan Grundahl, we loved the dresses and skirts, lots of cloth!  We also found Paul Harnden Shoemakers… and if anyone can figure out his web site please let the rest of us know!!!!!!  You can see imagaes at this link  PHS. 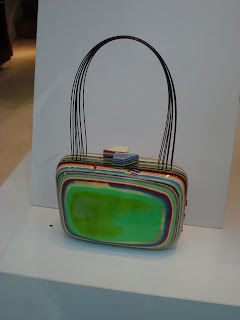 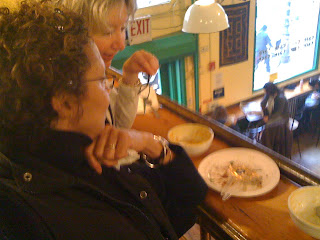 Here we enjoy a fabulous bowl of Carrot Ginger soup, crusty bread and a shared quiche and salad in Cafe Cafe somewhere in the heart of Soho. Such a busy and popular place, cozy and  warm and eating done upstairs on balconies!!! We sat for a while watching the locals popping in and out for lunch. 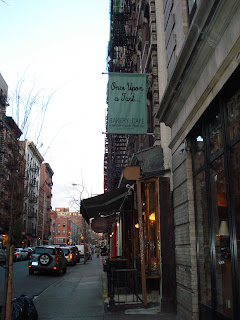 I discovered Margot eats more often than I need to so, at the recommendation of my Nurse Practitioner the week before, we sought out and hit Once Upon a Tart on Sullivan St (same street as Purl). We got a cup of tea (sorry, take out cups, now pots and china) and a delectable pear chocolate tart, yum!! There were pics on the wall taken over 100 years before when it was still a food establishment.  Next door the deli take out part had great sandwiches we got a Goat Cheese sandwich to take on the train the next day… also yummy. 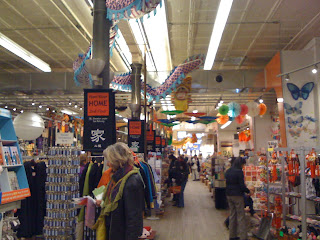 This place was amazing, Pearl River. We stumble upon it, though Soho was wonderful to walk around it was cold so we ducked in here and there… this was a whole block deep and we were in there for ages!!! I picked up some chopsticks to make sweater sticks with and also a really cool money box for knitters! It has cute sayings and instructions all over it. 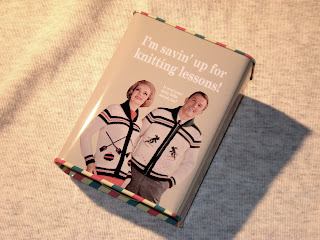 Here’s Margot lost in the fans I think. Note she is wearing my Noro knit shawl and got so many compliments I wore it the next day. It did look cool though, with her yellow purse and black leather jacket! 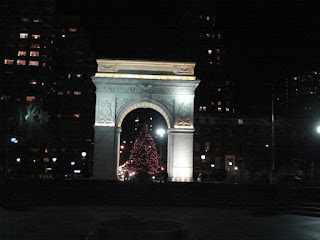 Well, we walked home that evening through Washington Square and saw the tree there.  We later were invited to the National Arts Club by  her old friend Ward who writes about the theatre and had to take off to do a webcast broadcast.

We hung out at the club and availed ourselves of the munchies being handed out and with a couple of glasses of wine. We had planned to head to Rockerfeller Center but decided to do it the next morning before our train. We did and the rest of the world was there.

We’ve decided that a hit of the Big Apple is necessary for artists and artisans. We visited FIT the following morning (we squeezed a lot in before our train at 3pm Saturday) and took in two wonderful exhibitions:   American Beauty and Night and Day (with an instructor in tow by coincidence!). It had been too long since I was there and going with  a girlfriend/colleague that likes to walk fast and loves the city streets on cold windy days is key!

Well, damp and early I finished loading my car…sweaters, knitting machines, some promo stuff, extension cord at the last minute, some old mags that the ladies might like to dig through…and hit the road at 9am….of course half way through New Hampshire I realized I hadn’t packed mylar sheets for the electronic machine…maybe Edith  –…

Well, I’m back from my UK trip which was a huge family gathering so no time to explore any yarn shops…even though my cousin had one she wanted to take me to…..next time! On my return, however I received an email from a friend saying she was coming through Kingston on her way to Rose…

Pink Felted Vest detail. My feet hurt…and we’re not even in Toronto yet! I spent last night sewing a new table covering for my booth table…so I can access all the stuff I store under the table, printing out rack cards…after photographing some new items this morning….outside…in the wind! While Monday night is our ‘movie…

These two things came about because of Christmas … the first beforehand and the second was a little gift from my niece.  I wanted to make some felted soaps as Christmas gifts and needed some mesh for the process. A colleague – Robert from Kingston Soap Co. said he had used mesh from a scrubby…