Skip to content
As most of you must know…it’s show season! After returning from Chicago in October I got ready for the Maker’s Hand in Picton at the beginning of November then Signatures show – in it’s new location – the Ottawa Convention Centre (with it’s commensurate costly parking)! My neighbour was the lovely Jennifer of Crumb aprons, we became friends and I look forward to having her as a neighbour in the future at another show….. not likely but I’d love it. 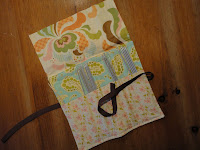 Well, as in shows gone by, especially in the eighties, we traded. Jennifer  got  a pair of my hand knit socks and I got a great knitting needle caddy for my ….. sock needles!  I love it as I added the cache of sock needles my Mum had…I’ll never run out again. 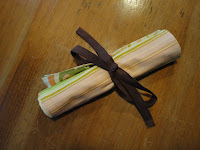 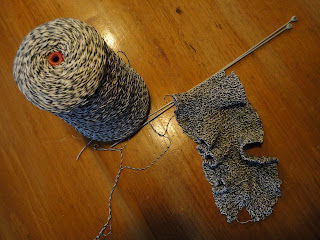 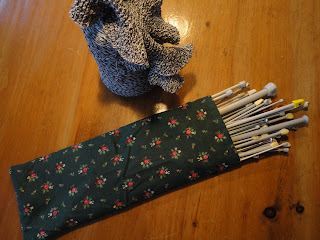 Speaking of needing needles I picked up a copy of Jane Austen Knits at my local Wool Tyme while buying more sock yarn…yes, only went in for one thing! I’m using a black and white cotton twist that is very soft and will work in Spring and Fall as well as Winter. Well, I was looking for a pair of needles and when I looked on the high shelf at my stash I saw… my Mum’s knitting needles! Wow, I forgot I had taken them when Dad cleared out their house after she passed away and I cadged them. This cotton bag is full of needles, some of which are of a style/brand that I remember her using when I was a kid in England.

Then there is her case of pretty much a full set of bamboo needles. I’ve not used them much in the past but I might give them a try.
Another wonderful find is a supply of mesh pressing cloths. I’ve had one since I found it at a yard sale years ago and it’s great for pressing anything but especially knits. It takes the heat and lets the heat and steam pass through without having the iron touch your work. I searched the ‘net for them and then Pat Holbrook of Cardiknits emailed me that they were being sold a Added Touch in Oakville. They’re only $2!!!  I now have 6 if anyone wants one from me + postage but do try Added Touch. There’s nothing on the web site so I called them.
Now I’m in between two weekends at the Gift Giving show at Fort Henry here in Kingston. Artisans are in the lower fort displaying and selling our wares along with local Ontario wineries and some bakers … so everything’s OK if we get the munchies.
I took this picture after the first night while walking to the parking lot. 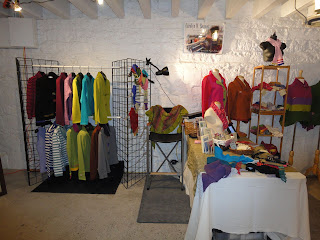 This is my display in one of the rooms of the lower fort. 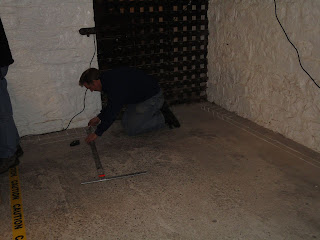 One of the artists in our room is Guy Wales who does three dimensional chalk drawings and is doing one on the floor of the fort. This is the first night, Friday, while he lays out and measures and plans. The gate behind him is locked but leads to a small room with floorboards which I believe lead to the moat and gun slits for firing out to protect the harbour of Kingston.

I’m looking forward to seeing how far he’s gone during the week when he will pop in and do a bit more work. The floor is to look sunken when it’s finished…the white chalk lines around the walls are evidence.

This lovely young lady is Rose who’s Mum Nessy bakes the most wonderful goods using natural ingredients and old fashioned recipes, making them vegan too. I ate a huge brownie guilt free as it was from plum compote with almonds and sweetened with maple sugar… the only sugar Rose is allowed. She’s been helping Mum and also doing some cool artwork.
Well, back to work as I have another weekend at the fort and another little show and also I’m uploading pics of my work to my etsy shop:   www.barnettdesigns.etsy.com. 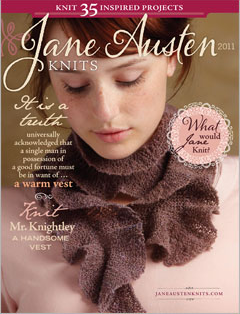 Well, we’ve had a good weekend, lots of folk showed up on Saturday and sales were made, pamphlets handed out and lots of chat, hot apple cider, sushi and cookies. Today is quieter so we’re taking time to explore the internet. Web sites on knitting, polymer clay and also looking at Etsy as I would…