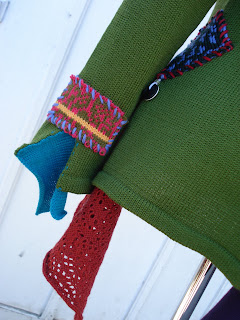 I’m in the news again! Though I’m down in North Carolina recovering from several weeks of Spring shows and teaching a Skype with my folks reminded me that someone asked me for a photo and a blurb recently and now I’m featured in our local, and great, magazine: Kingston Life.  I’m in glad company – Marney McDiarmid, Richard White, John D Williams, Penny Gorman  and my lovely colleague and friend Andrea Graham. I’m honoured! 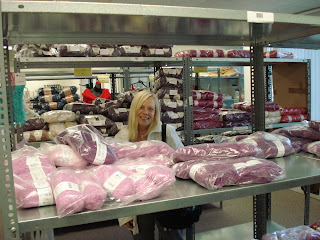 Meanwhile, the end of April saw my last ‘gig’ for a couple of weeks, Cardiknits Academy in Ancaster, ON. Lots of machine knitting gals looking to soak up some new stuff. I stayed with my good friend Sonja, another knitting fiend and we caught one of the last days of Coats & Clark’s outlet store, they closed May 1st! 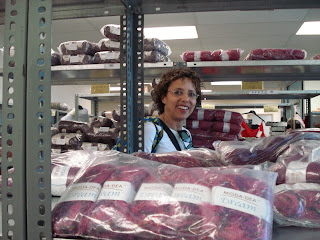 We nabbed some yarn that I have no idea what I will make but I just had to have it and add it to my stash. Sonja was in the same head space though she did have a project that she found just the right yarn for.

Here we are in the ‘stacks’ on the hunt. 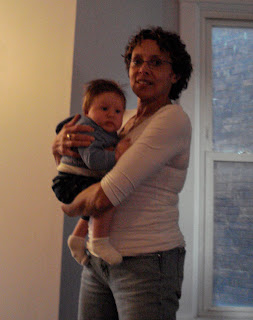 Sonja lives in Toronto and how could I be there without visiting my new grandson, here he is at 10 weeks old!!! He’s good enough to eat. I got to see his wonderful smile for the first time and see him so aware and active. Every time I had seen him before he was still sleeping off his rather grueling birth…well, he was nine pounds, here he is sixteen. 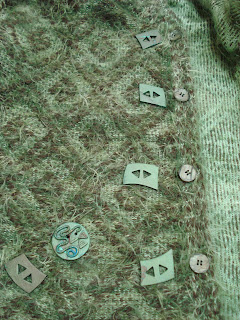 This is a shot of some great buttons, first efforts of one of my Button Making class at Cardiknits. She had made this jacket quite a while ago and thought she’d try making buttons for it, I thought they turned out fab and encouraged her to change them over! 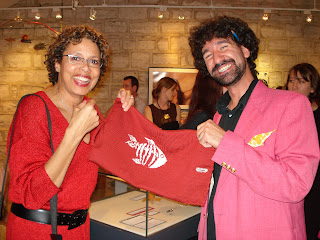 Me, the ‘Laptop Cozy’ and Trevor

Last but not least was the opening of the show which was the culmination of the efforts of sixteen artists/artisans: Kollaboration Kingston.  The resulting artwork from Lindsey Fair’s project is fascinating and beautiful and can be seen at the former Sandra Whitton Gallery on Ontario Street in Kingston until the end of May. The above pic is of Trevor Waurechen and me holding the ‘Laptop Cozy’ we collaborated on, I knit it using Trevor’s fossil illustration.

Now, I’m in the Outer Banks of North Carolina once again but with my knitting machine in tow as I will be returning to participate in the Up The Garden Path studio tour in Rockport – the Thousand Islands.
….. sort of a working vacation…..with beach walks…..

I know this sounds so silly but I have a new iron……. yeah, big whoop! Well, It’s special and I found it (well my husband found it) at a store that sells stuff remaindered from stores such as Sears. He knew my older TFal was giving me a hard time not steaming when I needed…

Just a quickie for anyone who might like to purchase a Knit Knotes note book…Blurb has an offer or $10 off if you order using the code Until March 31st SHARE10 Knit Knotes Get one for yourself for and one for you BFFF (best fibre friend forever)! Blurb… Inside are lots of line pages for…

On my recent forays downtown with my new little camera ever at the ready, I’ve snapped a couple of store windows which I found delightful and interesting. The silver jewelry shop next to my bank put in a ‘Winter’ theme using knitted scarves (purchased and one in progress) all in pink, blue and ecru, and…