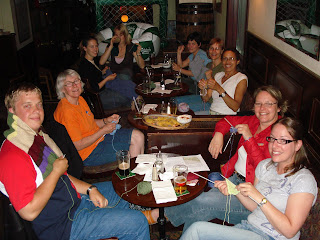 When I called a friend with whom I had long meant to get together she said she was going to the Toucan pub for a knitting night….. ‘Count me in’ I said and, after meeting for coffee, we wandered in together. We found a bunch of people at the back knitting away on various projects and gabbing away…this was the place.

Apparently, at the Yarn Harlot night a week or so before someone had asked if there was going to be a downtown knitting group and someone suggested the Toucan on Monday night and so the knitting group was born last night. We have no name but it’s unstructured, just a place and time to show up on any Monday night to find knitters in downtown Kingston…. and have a brew too.

My friend Irene and I learned lots too, like that we should join Ravelry, an online site with info, blogs, patterns, notifications and so on. We looked at others projects, Ann Woodall from our local Wool Tyme was there with a really interesting ‘cabled’ scarf that had no wrong side. We learned about a sale she’s having on sock yarn. Irene learned she can get Ann’s Wool Tyme newsletter.

One of the best parts was the fun and the laughter, I left a little early as I really had to put in an hour in the studio before hitting the hay.

I’m going again any Monday night I can!