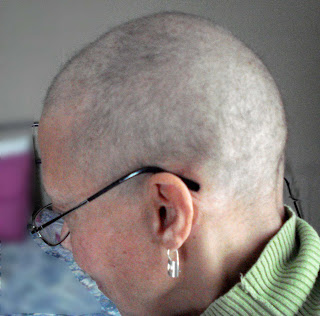 Up early this morning to high tail it down to the hospital for my MUGA (MUltiple Gated Acquisition) scan, still feeling fortunate that I was home to take the call to grab what they had. While I waited for the radioisotopes to be mixed with, or whatever they have to do to, my blood another lady came in for exactly the same thing. She’d had the same cancellation then the call back to get in first thing. She must have been up waaay earlier than me as she looked bandbox fresh with every hair and stroke of makeup in place. As we chatted I learned she was dealing with cancer which had metastasised into her liver……! What do you say?

Each time I hear the news I think myself fortunate that I got this diagnostically precious thing. The nuclear med technician said she had to prepare for the next lady, her stuff was dying as we spoke!!! This stuff doesn’t keep more than a few days.

On to brighter note, I decided I wanted my head photographed each month so I could see the progress of regrowth. Here is the December one. Hair has been growing back for the last three or four weeks, enough so far to keep a miniscule layer of warm air next to my scalp so it’s not freezing as I go from house to studio (two steps outdoors).

I think my head looks like that of a little old man! I was born with more hair than this!!

Overlooking Confederation Park, Kingston It’s Summer, how do I know? I haven’t the time to plant any more flowers because I must get ready for my two Summer shows. First coming up this weekend is Fanfayr here in Kingston. I have done this one for years…since the last time I had short hair (early ’80’s),…

Just For Us Originals – my booth. It’s been a busy few weeks recently, on returning from Cleveland I had to prepare for the Just for Us Originals a wearable art show in this year in Oakville tacking onto the coattails of the World of Threads show. Unfortunately I was unable to see any of…