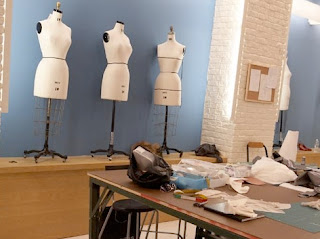 Monday night in my studio and the new fall TV programs are on. The one I was watching is Project Runway Canada.

It’s on Slice TV, hosted by Iman and Brian Bailey and filmed in Toronto.

I’ve watched Project Catwalk UK, Project Runway (put onto it by my step daughter) and it’s always the last hour that I work in my studio so I’m usually sewing a sweater together, or doing some hand work (so the machine doesn’t drown out what I want to here on TV) at the ironing board. I feel like I’m a fly on the wall in the contestants’ studio (pictured here) and it’s like having work mates, except these ones are often immature in their work practices with others in their workroom. Also I’m amazed at what some of them come up with given the brief of that day.

This day, the premiere, they were told to rifle through some other contestant’s personal luggage and take four pieces. They were to make an outfit out of these four pieces…..aaaaaarrrrgh! Someone cried ‘don’t take my cashmere’. If it were me I’d have run like the wind on that second thought…. well maybe. The next day when they were to start, each was given the opportunity to take back one piece, one girl got to get her leather jacket back!!!! Heaven knows what would have happened to it otherwise.

It’s a great program to watch for inspiration and to see creation in progress, makes my solitude in my studio feel like a part of a group for an hour.

Oh and there’s the bitchiness…. and that’s just the guys!!!

One of my cardis in the window display of Kingston Frame Works. This weekend is the Town and Country Studio Tour in Kingston and I’m looking around my studio and wondering if I can ever tidy it up!!!! Then…after the tour is over can I ever find the stuff I tidied away! Same old problem,…

Well, yesterday saw me leave the cancer centre after my last chemotherapy!!!! I still have to have one medication infused so I still have my port that’s the last chemo! A couple of days ago we went out to visit our friends who have and are still working on their new house in the country…

Well, with Art Amont The Ruins just a short week away I’m trying to get some more vests done, and also to start photographing and videoing myself working. All needed for web site, grant applicatioins and so on.  Laying out a vest. So here I am at my work table that when I set it…

It must seem as if I took a long time to finish this jacket but it’s done and long gone to it’s new owner …. and wouldn’t you know it I didn’t take a photo of the finished product. The same style in a different colour is shown in the fourth image. After the jacket…

A set of my hand made buttons. Recently a friend steered me to ‘Stumble Upon’ as a great time waster or a resource…. I’m in love! I put in knitting, fashion, web design, graphics and some others as my key interests so that when I surf only sites I’m remotely interested in come up and…