My New Year started of with a bad cold and a passing. My old high school sweetheart succumbed to his cancer and left us on January 2nd. I was fortunate enough to be able to visit him and his family in the hospital hours before he died.
He broke up with me back in ’68 when he got his first bike… a Candy Apple red Triumph Bonneville and I just didnt’ belong in the biker life, however, forty years later I had and will always treasure our Fall Harley ride. 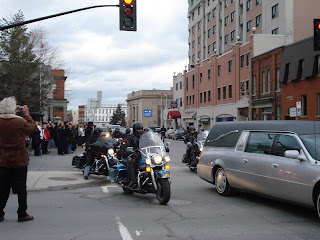 There was a wonderful and huge funeral at our local St George’s Chathedral, and as Wally was a Harley Davison enthusiast amongst other things, a cavalcade of bikers escorted him to his final resting place. He had a wonderful send off but at just 59 it was too soon.

On a happier note, the wedding dress I had been making for my sweet young friend Shawna was fitted, completed and worn on New Year’s Eve for her wedding in the snow in the woods. It took a few fittings, first the back, where I always start. We had done the pattern in Garment Designer and after the first fitting I knew where to make my ‘tweaks’. 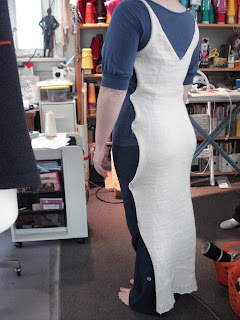 Here is a shot of the first fitting where I pinned the back to her clothing to see where changes were needed. I reworked the pattern to change the gauge (sometimes you don’t get the real gauge until you have knit the whole piece) which gave us a longer back and then I raised the waist and reworked where I was going to put the darts. I then fit the back to the front ( you know how usually backs and fronts in knits are the same), this was very fitted and so the front needed the darts to be shorter above the waist so as to give more fullness over the bust. I also raised the V in front by 1″. 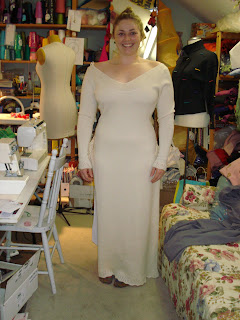 Here we have the final fitting in my studio where I set where the hip band of lace would sit and what I would do to cover the point where the side skirt godets joined the main body. The whol body started on the 200 needles so I needed a bit more in the skit to hang the way Shawna and I wanted.

I started the body and sleeves with lace so I made the hip ‘belt’ of a long piece of the same lace pattern.

Shawna and I had been on the same page all the way so it was really an exciting journey, and my husband and I drove the dress to Kilaloe to deliver it to the bride the day before the wedding and had a wonderful evening with both families over a huge ‘rehearsal’ dinner at the groom’s family home!

On another light note I was asked to be this month’s guest speaker at the Downtown Knit Collective in Toronto. A gig I thoroughly enjoyed, meeting a whole passel of hand knitters and some machine knitters thrown in. 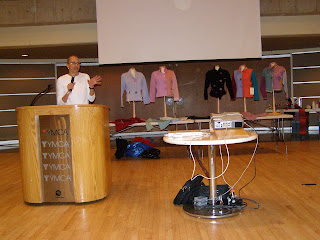 I had some of my designs on display and talked about my career, how I got there and how I worked and designed. I think I went over the alotted hour when I thought I didn’t have enough to say! I had a couple of slide shows on my laptop for more illustration and they had got me a projector for the huge screen in the auditorium of the Metro-Central Toronto Y. This was a great group of knittirs, most of whom knit away while I spoke. 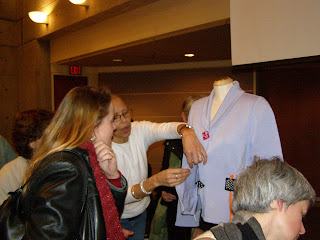 We had a great time afterwards, discussing button making and knitting techniques machine as opposed to hand and how you could transpose from one to the other…. made me think! 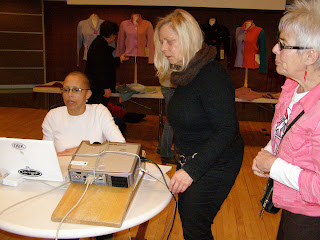 My wonderful friend Sonja had organize this… here we are setting up the slide show beforehand. However it did take the only male knitter to push the right buttons…now I know how to make that connection!

Now I’m finishing off my 2007 orders I’m hoping to have my double mastectomy soon (long story… right next move) and heal before the Spring shows!!!! Whew! I’m orgnaizing my 2008 shows and a gallery show here in Kingston and hopefully more teaching. I want to do a Weekednd Workshop in February but I need to know about surgery first!

Oh well, it’s day by day…. and this one is bright and sunny.

One Reply to “Happy New Year!”