My second year of Haliburton teaching and I’m just recovering from the work, having every minute filled, the energy of my ladies,  not to mention the loading, unloading, loading and unloading the car with knitting machines, tool, ironing board, mannequins and so on. The drive is always beautiful…. unless you drive up after a two day show which came after a week of moving a family member and it’s bucketing down rain as you drive through the hills! I pulled over for a nap half 40 clicks out of Bancroft. 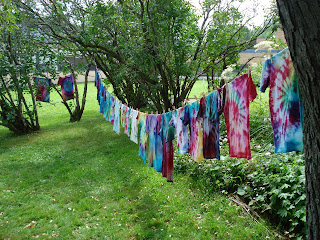 Tie dyed T’s drying, from another class. The view from my classroom.
We valliantly endured opera rehearsals in the next two rooms and one morning of a french horn player practicing in the courtyard. Clowns prancing up and down the halls speaking in tongues! 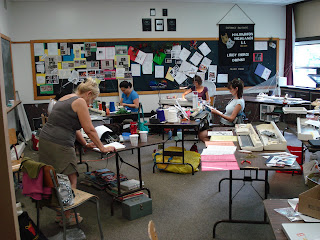 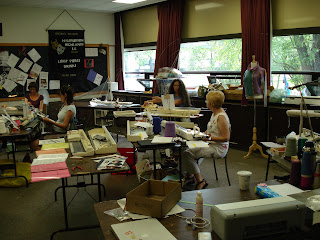 ….more busy class.
This was a hot room with only two electrical outlets for four laptops, two fans an iron and half of the machines were electronic, though we didn’t use that much. 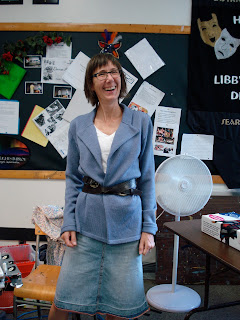 Sandy’s amazing knit jacket…. oh the math!!
Sandy is one of my beginners from last year who made two garments on a rented (from me) Singer 360 then and chose to make a notch collared jacket this time around on her Singer 700. Considering the hurdles she went over (and dragged me into… guess that’s what I was there for) it turned out great and really wearable. This is one woman who can get away with a belt over a knit garment…. so fashionable. A Canadian made belt…. must get the maker’s name from her. Of course Garment Designer was used to make the pattern and it fit well for a first draft. 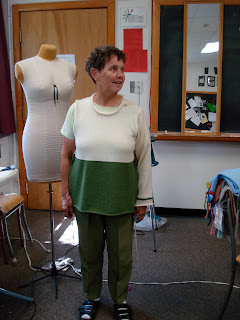 Krystyna’s first sweater…. the other sleeve is on it’s way.
Krystyna, our beginner, showed such promise as she waded, struggled, endured her way through her very first sweater on her LK150. When she suggested she try a tuck stitch Sonja and I (old knitters) said her machine didn’t do that….she opened the manual and proved us wrong and herself very adept! Krystyna used two different yarns and made it work, the pattern being worked on Garment Designer. 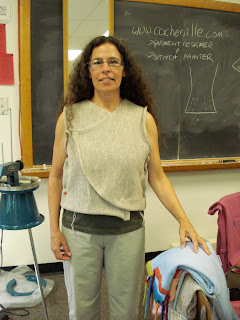 Heather, well what can I say…starting with a plan to knit her garment sideways (something I’ve always wanted to try but not had the time) and using a really pretty commercial tweedy yarn.  Found the yarn was weak so switched to her own hand spun yarn, beautifully hand spun yarn. I’m looking forward to a photo when it’s finished. Heather likes to make changes, and tweaks… and changes….on her sweaters. 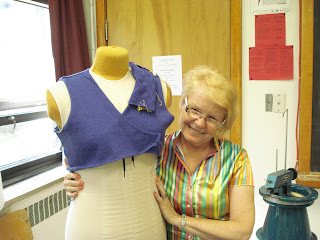 Good on ya, Terenya. A grand job and lovely design.
Then there was Terenya, I was sure she would get p#%%@ed off with me and leave as I drummed things into her over and over….heck I would have! But she stuck at it and created this lovely little bolero jacket (tuck stitch collar and sleeves – her design – to come), using a yarn she hadn’t planned on and had to buy from Sonja’s stash.
Sonja persevered with a yarn she later realized was probably not suited to her machine… I hope she endures as I love what she was working on… a really unusual design… and I think she can do it….perhaps with a little less heat and a lot fewer sopranos! The rest of the class worked on trying out new techniques for shaping and working with the garter bar and Decker combs…I took ages to become adept with both, I hardly heard a peep out of them as they worked on each day to master new tools…. I want to know what drugs they were on and where I can get some!!!
Carry on ladies, I am sooooo looking forward to next year!

The Gang in the Upstairs Workroom. Well, another polymer clay Button Making workshop at the Thousand Islands Art Center in Clayton NY successfully completed. Not a huge class, I’m used to 10 – 15 but the five lovely ladies I had this year consisted of the three ladies I had last year and two newbies….

While surfing the net looking for inspiration I found this blog…. http://www.aboutknittingmachines.com/KnittingMachineMagazines.html  I started to download the magazines and one by one and found so much of use and interest…even among the oversize, drop shouldered ’80’s fashions I downloaded them all. I found a few things I want to make for myself, some neat instruction…

My good, but distant, friend Judith had a project last year, to make one of my designs (one she had made in a workshop in my studio, in a style to wear to a Breast Cancer fundraiser. She was working in Black Cannele mercerised cotton with ‘Sugar’ (pink) accents. She needed some pink and asked…