I finally got some photos out of Sonja’s camera from Inspiration 2007 in Cleveland last month. The ladies in the Button Making workshop did will in experimenting with polymer clay for buttons for their knit (and sewn) creations. 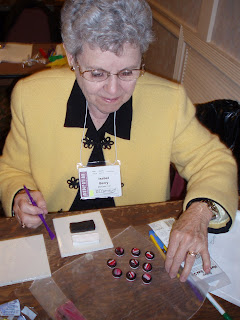 I had everyone choose four half blocks of colour, so they had four colours to work with, 1oz each, but with instructions to share and swap. Later I had some extra so they were able to pick up some Pearl, Gold and such.

Isabel here got some hook and eye ‘eyes’ from my stash and made a lovely set of shank buttons. I hope she has a garment in mind as she did a beautiful job, I think she had some yarn in mind, hence the blend of colours in her buttons.

Here we have some mixing of black, copper and a russet shade which she may have mixed herself. 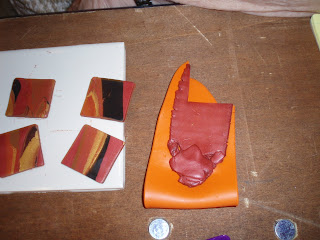 Then she curved them a little and laid them in a folded 3″x 5″ file card and we fired them that way. They came out beautifully! 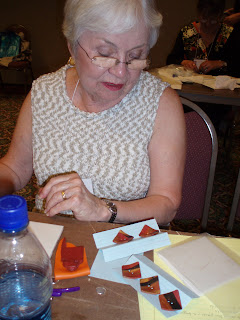 Here’s Rose helping a newbie get use to the PC and giving her hints and tips on using her tools and creating using her colours. With two busy classes of 19 and 16 I sure needed the extra pair of eyes and hands!

It was also a great chance for an exercise in colours and putting them together. I was surprised at the colours chosen, I ran out of some and had lots of others left over…. like purple, even though I had a fairly even balance of blocks of colours.

Rose is well versed in polymer clay but we work differently as she makes jewellery and I buttons mostly and some pins for my garments. So she had different information to throw into the mix for the participants, like using Pearl-Ex and such. 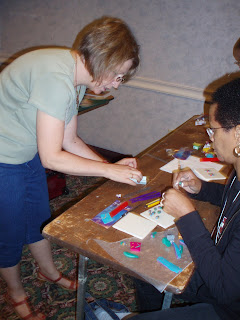 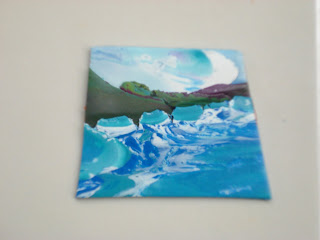 This past weekend’s class here in K’town went well and was a great way to spend a really rainy
Saturday! With 9 participants I gave a demo first to give them an idea of how I work and the process. I gave them some hints and tips to be noted down along with some handouts and then let them go with tools and this time 8 colours.

I cut the clay into quarters and every one started with eight chunks in differnt colours, later they were able to pick up more in different colours 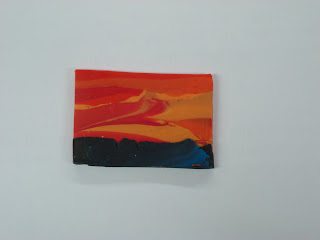 f freefall! Putting colours together, running them through the pasta maker and seeing what came out and where it might go from there. Here you see two pieces by Robin who ended up doing these tiny scenes, we loved the ‘ocean’ (above) and then her ‘sunset’… I think it looks like a beautiful one.

These two pieces are about the size of a large postage stamp!

This gang or women descended on my studio last weekend out of a blizzard (no… we’d planned it for just ages) and I tried to work their @!*’s off over the weekend on their knitting machines. Carol (in red) supplied the fuel in the form of a marvelous manicotti -yum- which we ate on the…

More from Artisan Knitworks, in Detroit, these are the skeins of yarn I purchased. The first one is a jumble of different colours and textures of yarn, including some blue sparkle! There were two skeins and, for my budget, I chose the smaller one…the other one didn’t have sparkles. I’ll use this in my felting…

For you machine knitters doesn’t this look like a fun machine….I haven’t investigated but it looks like you set it up and let ‘er rip! That’s what the uninitiated have been saying I do for years….we know it’s not so by any stretch of the imagination. Anyway, I don’t have a whiz bang machine..except for…

A while back I wrote about polymer clay and tool handle making. I think there was an article in Knitwords about same so I had to add my two cents worth. A few years ago I taught Button Making at the Cardiknits seminar and make a latch tool which I had made out of a…

‘Lei Too Woo!’ I’m in the news again! Though I’m down in North Carolina recovering from several weeks of Spring shows and teaching a Skype with my folks reminded me that someone asked me for a photo and a blurb recently and now I’m featured in our local, and great, magazine: Kingston Life.  I’m in…