Well, I am, as well as everyone….(the alternative is just not an option just now….too much life to live). Anyway, August 15th found me turning 65 in another country, on one of our road trips. This one took us by WEBS in Northampton MA in the USA, an even though every CAD $ I spend is really only about .76cents USD they give enough of a discount to even it out somewhat.

I had also wanted to hit New England Felting but I wasn’t travelling alone (with my other half) and circumstances left us hitting Northampton MA as they were closing…5pm! We’ve lots of time on our way back but they’re not open on Sunday’s. I’ll have to make another trip someday. I did pick up some hand dyed roving at WEBS but … it’s just not the same! 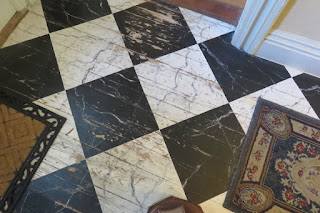 As usual, I’m all about design when we travel and the inn – Proctor Mansion Inn, we stayed in in Wrentham MA for my birthday treat (a Jimmy Buffett concert) was old and being restored. The rooms were beautiful and the new owners have taken care to keep it as it was originally bar the bathrooms and electricity. It was beautiful and a wonder too. I had to take a photo of this floor which was in the area which would have been servants and tradesmen…it’s a wooden floor painted to look like marble tiles…they’ve left it alone. 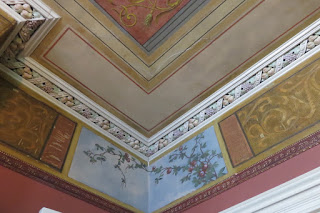 Here is a shot of the ceiling in the formal dining room….you can’t believe all the decoration folk used in their homes (well, the better off) back before TV! All this is hand painted and it was all over the mansion.
I’m hoping to head back next year and won’t miss NEF!!!