Whew! What a month. February was a month of workshops. Two machine knitting in my studio which were such fun and two button making, one at Wool Tyme and one with the Kingston Sewing Connection here in town.

I had such a blast with all the groups, and great munchies with the KSC!!! Such a great space at the Luteran Church basement, thanks, Jan, for inviting me. The ‘girls’ actually took over the toaster oven and fired their own buttons, yeah! 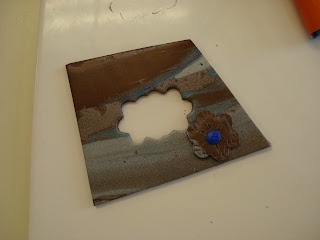 My biggest coup, though, was having Kathryn Brenne as one of my mac knitting students at my place, she did really well, then, lo and behold, she showed up in my button making class.

Well, long story short, I am picking up my email this morning having missed them yesterday due to cleaning up the flood in our basement….(little yarn lost) and find a sale of one of my discs and some buttons to a lady who follows Kathryn’s blog. I flew to the blog and found her write up on her Kingston experiences….  Kathryn’s Fine Sewing blog.

I lifted the above image from her blog, she chose different colours to work the inside of the hems which peep out. This is from someone who has never used a sewing machine before, though I think the understanding of clothing construction helped, she did a great job of following the pattern we worked up resulting in the lovely waist shaping and asymmetrical hem.

Do go there and see her pics of the buttons she made!!!

Now back to the mire of show prep….One of a Kind Spring in Toronto and Originals in Ottawa.