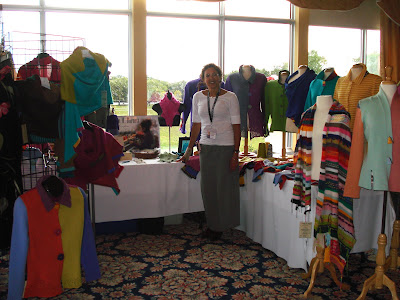 Just For Us Originals – my booth.
It’s been a busy few weeks recently, on returning from Cleveland I had to prepare for the Just for Us Originals a wearable art show in this year in Oakville tacking onto the coattails of the World of Threads show. Unfortunately I was unable to see any of the World of Threads but as it happens every two years I’m bent on seeing it in 2011, I had colleagues showing in that show and I’m so sorry I missed it. 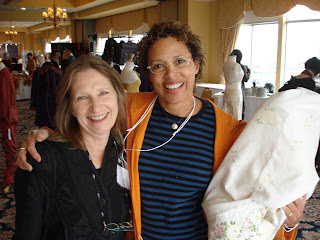 Dale Cox, me and a cloaked form!
A wonderful part of that weekend was that old friends Dale and Dave Cox were helping out. They are both great amimators and artists who have worked on many movies and animations including Care Bears. We got to play a bit of catch up, as we used to hang out waaaaay back in my first marriage (’70’s) I got to find out what some of the folk from that other life are doing now. 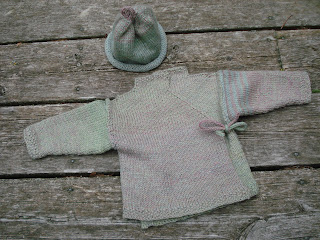 After the show closed on Saturday evening I got to drop in on  my step daughter Alana Kurtis, a musician and music teacher and pat her five and a half months along belly. Also to present her with the rest of the little outfit I made, the ‘Yoda Coat’ and  little hat with a twirl on top. When I popped into my local Wool Tyme they had about three little Yoda Coats knitted and on display. There’s no pulling anything over baby’s head and with this soft machine wash and dry Merino wool it should keep my first grandchild warm when ‘it’ arrives in February! 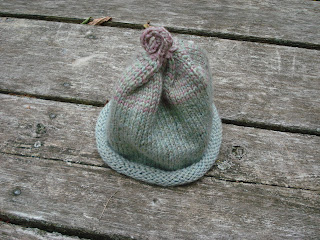 This was a pattern for an apple hat but  I left off the leaves and just curled the ‘stem’.  I do hope these are gender neutral enough as we don’t know the little one will arrive wearing pink or blue booties. 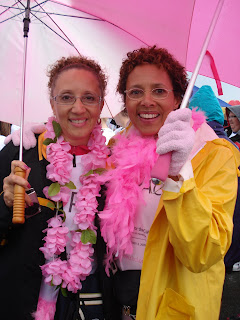 Judith and me.
I got back from Toronto late Saturday night and got up early for the CIBC Run for the Cure which went along the lake and past our house this year. My sister Judith and I walked on the ‘Sue’s Care Team’ for Dr Sue Hendler a neighbour of mine for many years and head of Women’s Studies at Queens University. She was diagonsed (after a lot of false starts and palava) with breast cancer but it was already far along. Chemo and radiation and many drugs made her very ill but didn’t cure her cancer and knowing her days were numbered she put together a marvelous group of her friends to see her out of this mortal coil as comfortably as possible in her own home. She passed away a few hours after entering hospital. 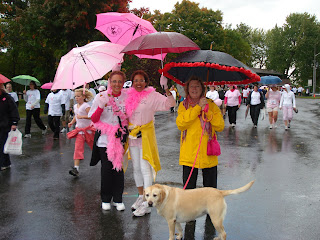 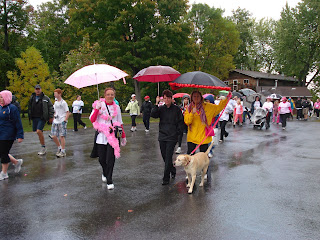 Pix of Judith and me walking with our friends Erin and Yvonne and Nuggett the dog.
Sue arranged her memorial service (which I was unable to attend being in Oakville but my sister went) and also a bit of a munchies ‘do’ back at her place after the run. Not only was it really good to meet the women who took care of her but I connected with the brother of a girl whos house I used to go to to listen to Bob Dylan records back in the late ’60’s!!!!  He said that as the big brother those had been his Dylan records. We really dug up the past and that was absolutely super…. thanks Sue.