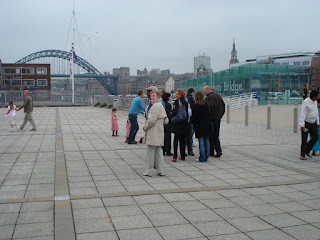 Long time since I have posted here. I’m currently in Britain’s North with my parents on their 60th wedding anniversary trip, long awaited and can’t believe we’re here. Surrounded by cousins who are no longer the little kids I had to play with when young (I’m the eldest) they are great middle aged adults we’ve grown even closer to.

Staying in Newcastle upon Tyne we spent our first day wandering along the quayside where there is a Sunday market, then going over the river on the Gateshead Millenium Bridge and back again to watch it open. This photo is of my Mum and a pile of rellies on the south side of the bridge, that’s the Tyne Bridge in the background. 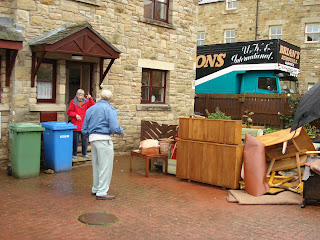 Today we ventured out into the country to a wonderful little town called Rothbury where my favourite Aunt lives. Dad had tried and tried to get hold of her to no avail and since he had called her from Canada and she knew we were coming we were very worried. She was my Mother’s best friend and her bridesmaid 60 years ago. So we thought… let’s just go and find out. Well, as you can see by this photo she had been flooded by the river behind where she lives, lots of flooding last weekend, and this is all her ground floor furniture that she couldn’t get upstairs put out for the tip! The water was in her house three feet deep and it will be six to nine months before she will be able to move back in. She’s 83 and amazing! It was so great to see her after so long, this photo is her telling my Dad where we might eat while she had to wait for the bloke who was going to come to tell her whether her floor needed ripping out! Fortunately she had parked her car up the hill so it was ok. 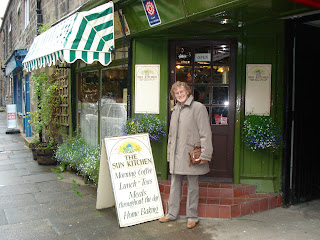 Though we were going to try a pub, of which there were three, Dad found a wonderful tea room, a little like the one in he movie ‘Withnail and I’. Quite tiny but with great food. We had lemonade and ‘jacket potatoes’ with cheese and beans (baked) scrummy!!! Hit the spot on a rainy British Tuesday. Here’s my Mum showing off all the beautiful flower boxes that we saw everywhere.

Weather being mild we strolled through the little town soaking up the history, narrow lanes and old stone houses. 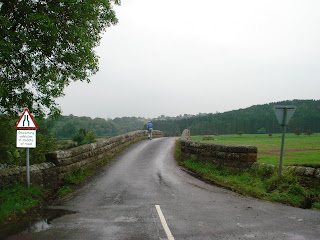 This is a stone bridge where we stopped to look at the river that had overflowed it’s banks and flooded out so many houses. A very busy place as it happens. A bus went by, some hikers, a fisherman by the bank and several cars. Looking off the bridge we could see all sorts of stuff in the trees that had caught there during the flooding.

Well, I must get some sleep as we’re off to Durham tomorrow to see the castle and cathedral and the University from which my Dad got his MBBS. (MD in North America.)

Well, I got lost in Bangor but I then ‘dyed’ and went to heaven!  This sign was outside a building for  children’s art and activities….it is so fun, the classes must be super!…there’s a violin on the other side! Anyway, I digress. While hunting for Stephen King’s house in Bangor I followed the directions of the…

Mum/Dad Robin This photo of our baby robins was taken two days ago, I climbed on the little step ladder and was greeted by what seemed like a sea of fluffy baby birds. There are four but seems like only room in there for a couple let alone Mum who sits on them when she’s…