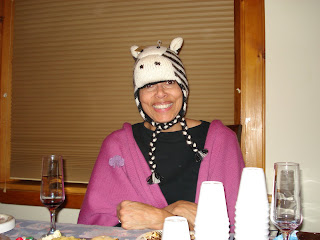 Well, thought I’d better bank out another post, the last one for 2008, as the last few weeks have been very busy for me and everybody I know. Though the shows are over for another year, it’s more than past time to look at next years shows and mostly the cheque writing part ….. I’m doing my Scarlet O’Hara bit and thinking about it ‘tomorrow’. Meanwhile, as you see by this stunning photo of me at my sartorial best, I’ve been having fun. My lovely English neighbour had her sis and friend over from Blighty for a few weeks and as they love hats one or two were purchased in their North American travels. This one is a giraffe….. and I just had to have a go….! 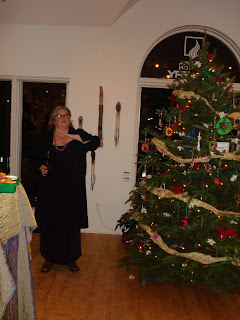 Later that same evening, just before Christmas, my dear friend Sandy Whitton held her ‘artist’s party’ for the artists exhibiting in her Art of Giving show in her gallery. It’s always great to get together with other artists and artisans where you don’t have to pretend you’re there for the art or have to keep a look out for customers in your booth. Here she is talking about the tree and the ornament (or ‘artament’ as Rachel her trusty assistant named them) swap. I didn’t make one so I wasn’t involved. Some of the ornaments were wonderful, beaded book marks, felted balls, paper, wrought iron, polymer clay… and then some little ones that were like a short golden cigar with a couple of red bells…hmmmm. Realizing they were actually tampons covered in foil ( they com already strung) I went in search of the designer. J T Winik is an amazingly talented painter with, I found, an odd sense of humour! Still waters run deep. 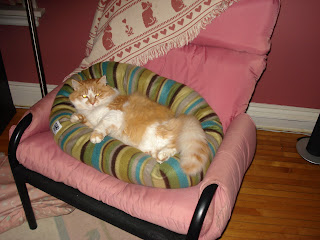 While we were away in Chicago another neighbour looked in on our cat/yak (they’re about the same size) and she bought him a bed, here he is sleeping in it but it’s the only time as, being a cat, he likes hard lumpy things (baskets, the stones on the driveway) or soft things that belong to other people. There can really only be one large puffy thing in his house and that would be him. He didn’t get into this bed of his own volition... he had help. Though he debedded sharpish.

Christmas eve was spent at my sister’s house opening presents. Her family seems to be off in a puff of smoke on Christmas day so the folks and we eat turkey without them, anyway, a beautiful tree and waaaaay to many gifts mostly courtesy of my Dad who either won’t listen or can’t hear. It used to be the former, I think now it’s the latter. 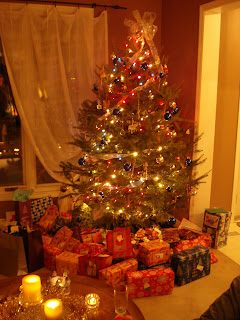 Great food, too many chocolates, and I even got home to in time to see Scrooge give Bob Cratchet his raise… I love a Christmas Carol with Alistair Sim. 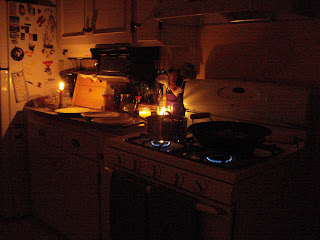 Isn’t incredible that with all the storms, blizzards and snow we got in December we had a rainy green Christmas! Bah Humbug to that. However the storms came the last couple of days blowing down trees and putting out power. We lost ours a couple of days ago and while hubby was suggesting popping our for a some supper before the sump pump’s inaction led to a flooded basement I remembered we had put in a gas stove since the last power outage and ‘have match will cook‘ became my motto and I tossed together some rice and a rather tasty stir fry, if I say so myself. This also proved to keep the place warm, as you can see, with the candles and the stove top we were quite cozy. I invited my friend over who was dog sitting the English neighbour’s pooch and when we had just sat down to eat the power came back. 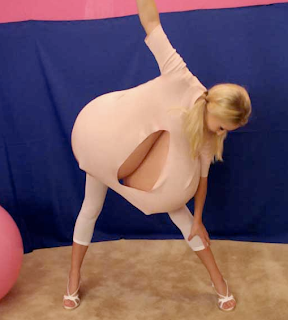 Well, I did get rather a great Christmas prezzy. I have a surgery date! Yay. I lose the old boobs and get new ones all in one fell swoop! Not surgery, after wait, after surgery. January 15th is my date and after that I’ll be doing nothing for a long while, having not to use my pec muscles. I hope to heal well though and at least be able to hand knit and work on the computer as I’ve lots of web stuff to do. Quite frankly I’m excited that my letter writing to the plastic surgeon got this going and I will be able to move to the next stage of my life endeavouring to stay fit and healthy. And also I’m sooooo looking forward to the rest!!! Anyone who knows me knows I have to be felled by ‘flu or knocked down by a bus to actually lie down if it’s not bedtime.

Sweater Sticks in progress. Whew! What a month. February was a month of workshops. Two machine knitting in my studio which were such fun and two button making, one at Wool Tyme and one with the Kingston Sewing Connection here in town. Working with cane. I had such a blast with all the groups, and…

Well, I’m back from my UK trip which was a huge family gathering so no time to explore any yarn shops…even though my cousin had one she wanted to take me to…..next time! On my return, however I received an email from a friend saying she was coming through Kingston on her way to Rose…