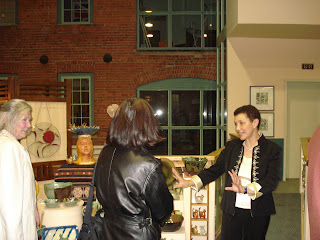 Just last week I attended the opening of my friend and colleague Delvalle’s new gallery location. Yes everyone was there, here in Kingston you run into everyone at gallery openings – both artists and patrons – and it’s a great way to stay connected and in touch with the scene. 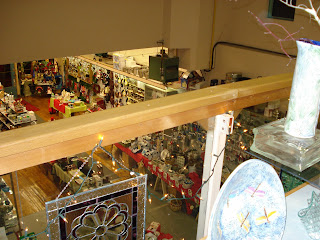 Delvalle had a lovely spot on a corner just a block over from the main drag Princess St, but big developers came in, bought the building and said she must be out by the end of October. We all wondered where she would find new premises but she found the mezzanine inside and over the downtown hardware store Vandevoort‘s. There’s this amazing space which hang between the main store and the back of the building on the next street over which you can see in the picture.

Here’s a shot from the mezzanine overlooking the main floor. 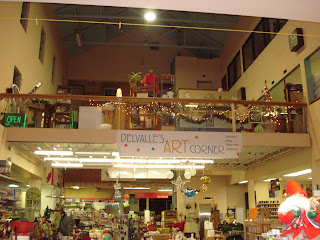 She has her own ceramic studio there where she can work when not attending to customers and carries a lot of local artists’ work from pottery to glass, some fibre and all the other mediums one would find in most galleries. Here’s a shot looking up at the mezzanine from the main store and a shot from the street. 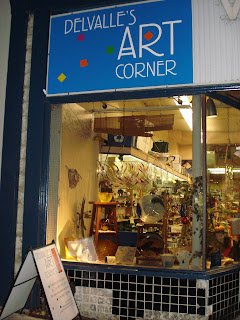 We’re all so glad she’s not reduced to selling from a cart on the street!!! 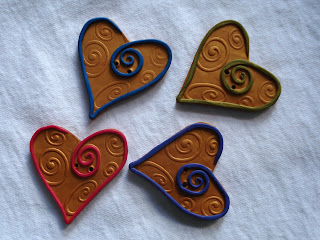 I’ve been working hard for the Chicago One of a Kind Show which runs from December 4th to 7th at the Merchandise Mart. Some new buttons and wraps as I need smaller less expensive items in my inventory. 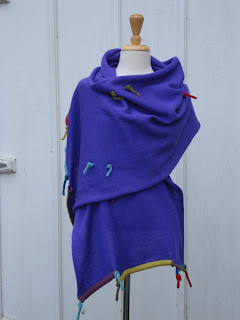 I really love doing the wraps and can’t wait until I have all done all my orders an I can make more and have some fun with them. I have such a stash of specialty yarns that I want to dig into. It’s such a waste to let viscose ribbon and silk hide away in a storage bag.

While on the way to working my way through the orders and stock that I need I was doing stripe and really b&!@*#?d up my machine by passing the carriage over the bed with the yarn changer arm on it and somehow bending a lot of latches… 34 on total! I thought I could pass it over needles in hold! 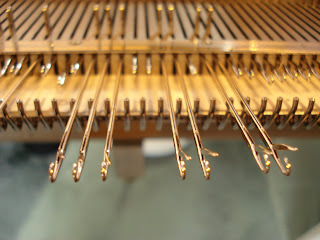 You can kinda see them leaning over to the right, here …. aaaaarrrgh!

If it were my workhorse machine on which I no longer pattern I would have just put the needlenose pliers to ’em. But this is the machine I do lace on so I baby her. 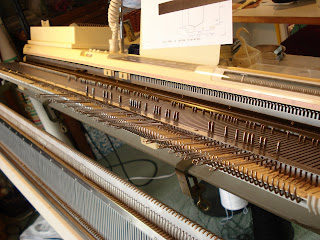 Though it took me a while to pull out all the old ones and replace them I was fortunate to save all the bit off my old Singer 560 including all it’s needles. This move put quite a dent in my cache.

I went on to knit my stripes, moving the yarn changer arm over hold needles with no ill effect. I must have had them not quite all the way out the first time. 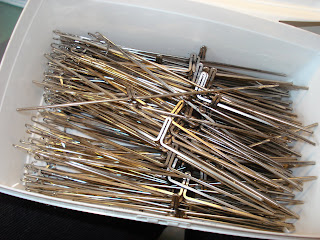 Thank heaven for my stash or I would have had to cannibalise one of my other machines….. (or my girlfriend’s which is languishing in the basement while she’s in South Africa!!!)

Erratum
My dear friend Sonja called me yesterday to ask if I had received my copy of Knitwords. I have but just checked out the patterns. She told me I was listed on p.24 in Mark Your Calendars as teaching at the Purls of Joy in April but not listed in the Finger Lakes seminar in May. Well, I’m doing the Finger Lakes but not the Purls of Joy this year. I hope I can go to Minnesota in 2010 as I have been invited.

Well, now I had better get back to the knitting machine, the paper work for exporting my wares, some web site updating I need to get done… for mine and also for a client.

I couldn’t resist taking pictures of our baby robins ….. well only ours in that their nest is on top of the folded up screen for our bedroom balcony door. The robin family got to the screen before we had need to unfold it and use it! My husband used a mirror to see what…

Well, with Art Amont The Ruins just a short week away I’m trying to get some more vests done, and also to start photographing and videoing myself working. All needed for web site, grant applicatioins and so on.  Laying out a vest. So here I am at my work table that when I set it…

I can’t believe it’s time for shows again….I always think there’s this long, bleak Winter period when I can get tons of stuff done as there will be no other demands on my time, but…NO! I’ve had a busy Winter and not done nearly all the things I wanted (start the book, felt a long…

Well, November is proving to be a really busy time of year (like I don’t know after 31 years!). I’m not doing the One of a Kind show Christmas edition but I have some small events that should be fun. The first one is at the new Anwyn Yarns  just up the road from my…