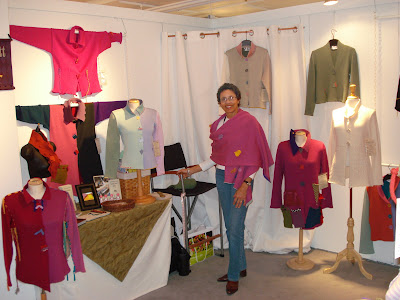 The Chicago One of a Kind Show and Sale is over for another year and we got back on Monday after an uneventful drive through Michigan (no lake effect blizzards), and a pleasant but short stopover in Battle Creek. I did learn that apparently two men – a native and a white man I believe – had an argument by a creek and marked it on the map as the place the battle occurred, hence the name.

Here I’m wearing my new SweaterWrap that has a scattering of hand knit flowers on it. Which I’ve been knitting all year I think!!

Anyway, the show went well considering the economy and listening to folk getting off the elevator saying “I’m just going to look”. I managed to sell to one or two of these ladies, one of whom bought a black jacket that looked terrific on her then said “That’s it”. Another lady had looked at said jacket of which I only had one (hence One of a Kind) as it was a Large and might fit her well, but off she went to shop elsewhere. When she returned the cardi was gone so she left disappointed. (So was I)!

Our wonderful friends with whom we’ve stayed for the past six years are in a state of upheaval with a move so they recommended a B&B in the neighbourhood of Oak Park where they stayed when they moved in twelve years ago. The Under the Ginko B&B was an experience and we look forward to staying there again! A huge Victorian house run by Gloria and also Dan with whom I agreed when he asked me if he looked like a gangster. Breakfast was a treat in the large old dining room with the other guests chatting with Gloria and exchanging travel tips. If you look at their site we stayed in room 4. 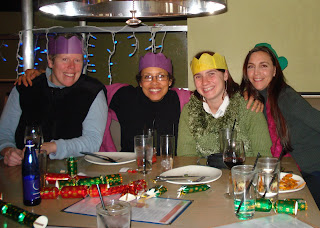 While away I was in contact with Kingston colleagues who were involved in a new show the Gift of Giving at Fort Henry run my friend Lindsey Fair. I heard it went well, the fort is a really interesting place for a show, so much atmosphere and I’m sure a ghost or two. With all the stress of show prep and involvement Lindsey mentioned a large drink to follow when it was all over, I agreed and she put together a group on Facebook. Well, only four of us showed up but it was good as we got to hash over some issues, eat and drink then go on our ways back to work.

In the photo we have Jane Thelwell of Anglin Bay Pottery who’s business acumen always blows me away, me, Lindsey Fair of Beach Glass fame (and so much more) and Andrea Graham, an amazing felter, mother, business woman and teacher.

Well, it’s not over yet, not only the Christmas ‘do’s to attend, stuff to bake to take along, my Mum’s 89th birthday tomorrow and various other functions………I still have a ton of work to get done that’s overdue. Some due to lack of yarn (not here yet) redo/adjustment for something that didn’t quite fit and those that are slated as Christmas gifts. Expedited post usually takes one day but at this time of year it takes two. And I get, from a letter I got on my return, that I might be having surgery early in the New Year which would mean several weeks not using the knitting machine. I’m looking to work on some web sites and buttons, start an Etsy shop for my buttons.

Photo: Stagg Photo Well, it’s been an Up and Down time since my last post, that was the day before I went in for the big op, the bilateral M and reconstruction. A down? As I mentioned to the lovely male nurse who escorted me into the OR too bad I got this all set…

Well, another studio tour under my belt and it was difficult. I have long loved being in my tent on my friend Margot’s front lawn, she has her little shop, the Summerhouse, in Rockport, Ontario…but this weekend was a scorcher. With my collection We know the garden centres were packed! Gardening seemed to be the…