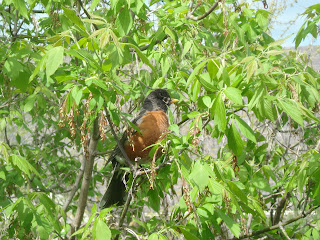 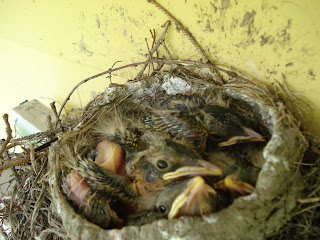 This photo of our baby robins was taken two days ago, I climbed on the little step ladder and was greeted by what seemed like a sea of fluffy baby birds. There are four but seems like only room in there for a couple let alone Mum who sits on them when she’s not digging worms out of the newly rained on lawn. 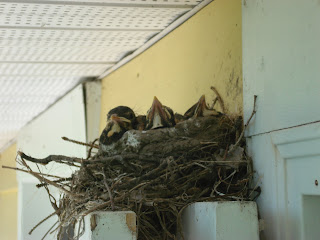 This one (right) I took this morning and they were just a sea of beaks so I didn’t go any closer! I also got down PDQ as the Mum/Dad was screaming at me.

Just a little while ago I was over at my neighbour’s back porch where she also has a nest of four robins.

Well, we won’t go short of robins this year! 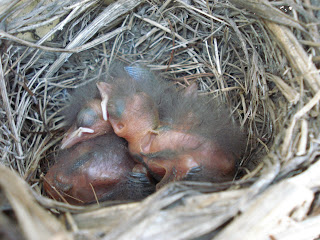 Here is proof that even if the grackles don’t seem to sit on the nest their babies still hatch! We were sure they were gonners until we noticed a lot of to-ing and fro-ing and hauled out the ladder, and Clint climbed up and took a quick pic. Looks like two and look just hatched. This nest is nestled in the wires that from the phone/hydro line and is reeeeally long as they must have dropped twigs down in the wires until it sort of looked like a nest!

No wonder it’s noisy outside if I happen to wake at 4 in the morning!!!

Long time since I have posted here. I’m currently in Britain’s North with my parents on their 60th wedding anniversary trip, long awaited and can’t believe we’re here. Surrounded by cousins who are no longer the little kids I had to play with when young (I’m the eldest) they are great middle aged adults we’ve…

~My Dad~ Just a quickie to celebrate my Dad’s 60th anniversary as a doctor. He’s still going strong at 83 with four days a week at his office helping people with Hypnotherapy. Dr. Edgar A. Barnett went into this about thirty years ago full time after a lifetime of fascination with Mesmer, hypnosis etc and…

Up early this morning to high tail it down to the hospital for my MUGA (MUltiple Gated Acquisition) scan, still feeling fortunate that I was home to take the call to grab what they had. While I waited for the radioisotopes to be mixed with, or whatever they have to do to, my blood another…